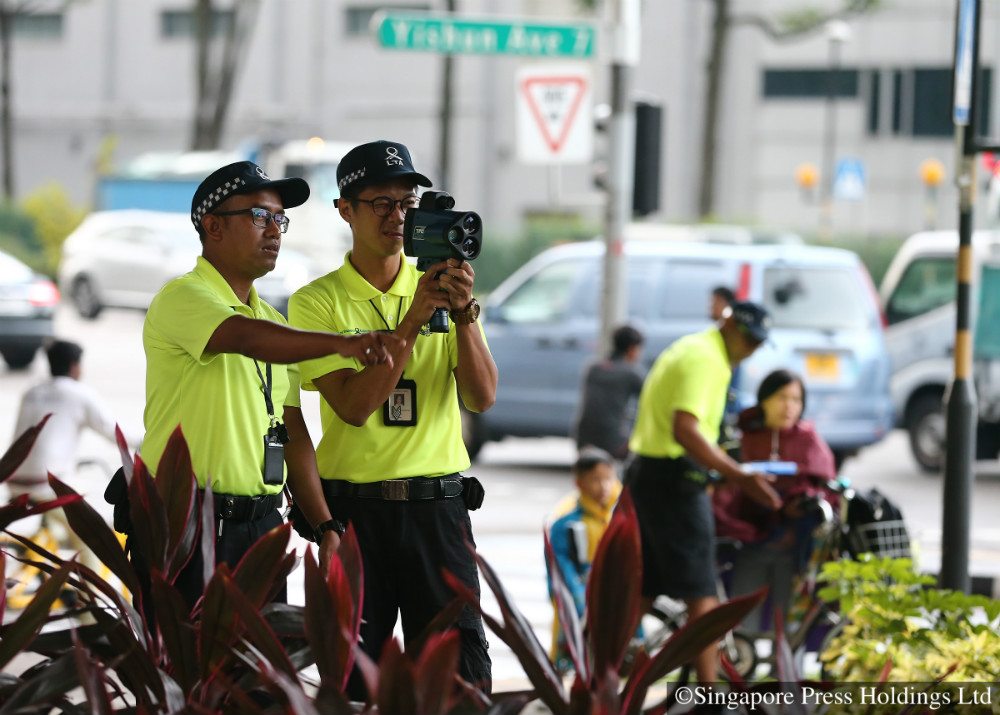 LTA’s active mobility enforcement officer using a speed gun to spot speeding cyclists and PMD users during the enforcement blitz on 2 May 2018.

Enforcement officers are now equipped with speed guns to catch cyclists and e-scooter users who break the speed limits on paths.

The Land Transport Authority (LTA) officially deployed such devices on Tuesday (May 1), the same day that the Active Mobility Act took effect, giving the authority more powers to deal with errant riders.

The Act regulates the use of bicycles, personal mobility devices (PMDs) and power-assisted bicycles on paths, with penalties such as fines and jail time that can be meted out to offenders.

The media was shown the use of the speed guns by the LTA’s Active Mobility Enforcement Officers, during an enforcement blitz held at the junction of Yishun Avenue 2 and Avenue 7 on Wednesday.

The guns have a range of up to one kilometre, and also video-recording capabilities. Under the Act, cyclists and PMD users must keep to a speed limit of 15km/h on footpaths, and 25km/h on shared paths and cycling paths.

Those caught speeding can be fined up to $1000 or jailed for up to three months, or both.

During the two-hour operation on Wednesday, PMD users – mostly e-scooterists – were also pulled over and had their devices weighed and measured.

The Active Mobility Act mandates that PMDs cannot weigh more than 20kg, must not go faster than 25km/h, and must not exceed a width of 700mm.

A total of eight devices were seized by the LTA for being non-compliant – the first time the authority is doing so under the newly-effective Act. The PMDs weighed an average of more than 30kg.

With the growing popularity of PMDs, the LTA has deployed Active Mobility Enforcement Officers to deter reckless riding behaviour since 2016. Riders were mostly issued advisories for unsafe behaviour.

Mr Willy Soo, a manager with the LTA’s Active Mobility Enforcement Section, said: “We have continued our usual deployments. The only difference between what we used to do… is that from May 1 onwards, we can actually give out a fine to errant users who violate any rules or code of conduct under this Active Mobility Act.”

The active mobility enforcement team has about 60 officers, who are deployed daily at hot spots around the island, said Mr Soo.

One of those caught on Wednesday for having a non-compliant e-scooter was a 37-year-old , who gave his name only as Mr Wong. His scooter weighed 37kg.

Mr Wong, who works in the food catering industry, said he purchased his e-scooter about 1½ years ago for over $2,000. He used it to commute between home and work, a trip of about 10km each way.

“I know it won’t pass (under the law), but I couldn’t sell it off. Without my e-scooter, I will now have to take the bus,” he said in Mandarin.

5 ways to stay safe on your e-scooter or hoverboard

Another e-scooter user, Mr Ong Zi Wen, 26, was pulled over. Said the freelancer, whose device was found to be compliant: “There have been many cases of accidents, so having the law is good for the safety of pedestrians and other path users.”

On average, there are about three accidents a week involving users of PMDs. There were 110 accidents recorded between January and September in 2017.

Mobot director Ifrey Lai said the company has pasted the warning notices at all its retail outlets on May 1, and sales staff also brief buyers on the proper use of the devices.

But Mr Lai said: “The measures are effective to control compliance for offline retailers, but it would be difficult to enforce online retailers for the reason being they are not required to disclose their company name and address.”