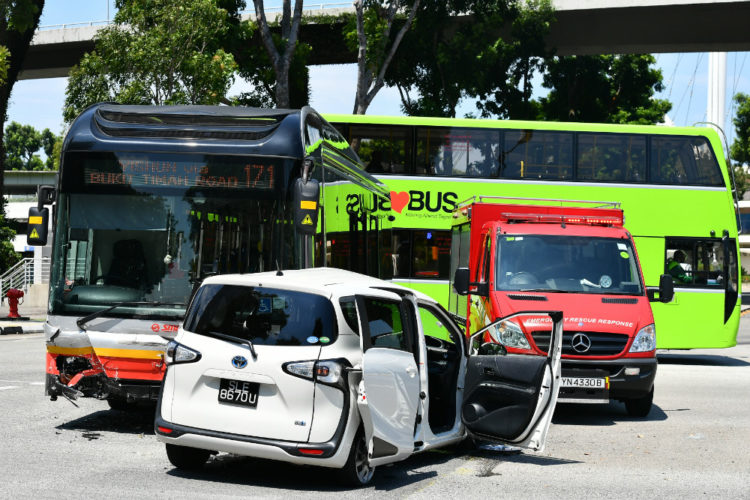 An empty SMRT bus collided with the Uber car, a white Toyota Sienta, at the junction of Bayfront Avenue and Raffles Avenue at about 2pm on 11 April 2017. The Uber driver and a passenger were taken to hospital.

The empty SMRT bus collided with the white Toyota Sienta at the junction of Bayfront Avenue and Raffles Avenue at about 2pm.

The driver of bus service 171 told The Straits Times at the scene that the driver of the Uber car and his two passengers were taken to hospital.

However, the Singapore Civil Defence Force (SCDF) and police yesterday said a woman in her 30s was taken to Singapore General Hospital, while the 46-year-old Uber driver was taken to Raffles Hospital.

The Straits Times understands that the woman’s injuries were quite serious, and she was accompanied to the hospital by the other Uber passenger, who was not hurt.

The in-service bus was empty at the time as it had just come from a terminal nearby.

Mr Nicholas Chew, 25, a public relations executive who saw the aftermath, said he was in another Uber car when he saw the bus in the middle of the road.

“It was blocking the entire road, so cars couldn’t get on the flyover beside the Helix Bridge. Beside it, there was a very badly banged-up car. A woman was being tended to by paramedics,” he said.

The Land Transport Authority, in a tweet at 2.16pm, advised drivers to avoid the left lane on Raffles Avenue towards Raffles Link, after Bayfront Avenue, as there had been an accident there.

Mr Patrick Nathan, vice-president for corporate information and communications at SMRT, said that no passengers were on the bus and the bus captain did not suffer any injuries.

“The driver and two passengers on board the private car were taken to the hospital.”

He said that SMRT has reached out to the three people and is investigating the accident.

The police are investigating.

The area has seen a number of accidents in recent years.

Last year, an elderly man was taken to the hospital after a taxi ran into him along Bayfront Avenue.

In October 2015, a 33-year-old motorcyclist died after a three-way collision with a van and a car at the junction of Marina Boulevard and Bayfront Avenue.