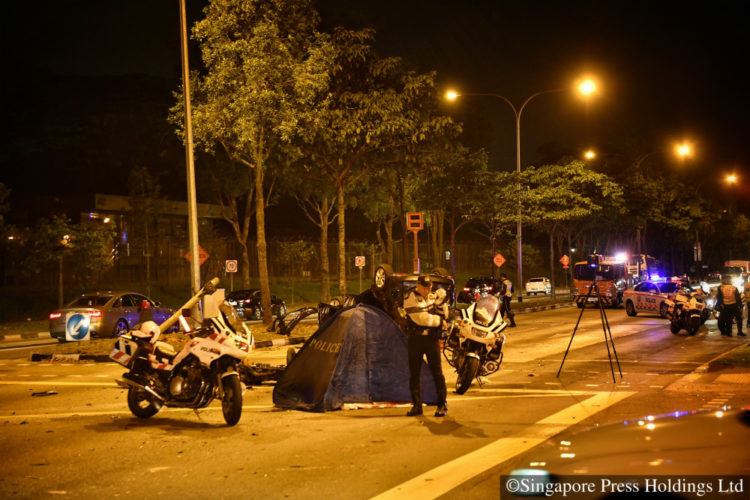 A 32-year-old driver has been arrested in relation to the Woodlands accident on Monday (Aug 7) in which a motorcyclist was killed.

A video of the fatal accident which circulated online showed a car travelling along Woodlands Avenue 12 when it went over the road divider and flipped over, hitting two motorcycles and a lorry.

One of the motorcyclists was pronounced dead at the scene.

The police told The Straits Times on Tuesday (Aug 8) that the 32-year-old car driver and his female passenger were taken conscious to Khoo Teck Puat Hospital (KTPH). An infant from the car was also taken conscious to KK Women’s and Children’s Hospital.

The police said the other motorcyclist was taken conscious to KTPH as well. The lorry driver had no visible injury, it added.

The car driver was arrested for causing death by a negligent act.

The Straits Times understands that the motorcyclist who died was 30-year-old Muhammad Khairman Mohamed Sabari, also known as Irman Sabari.

His wife said in a Facebook post that he would be taken to his home in Woodlands on Tuesday (Aug 8) between noon and 2pm.

“We will leave for Muslim cemetery (pusara) after Zuhur prayers, at abt 2.30pm,” wrote Ms Elina Sukhaimi.

“Please forgive any of his transgressions against you in this world, and if he has any debts still outstanding, please approach me personally. We pray that Allah (SWT) will shower His mercy on this man, and grant him the highest level of Paradise – Jannat Ul-Firdaus – and give his family patience in this difficult time.”