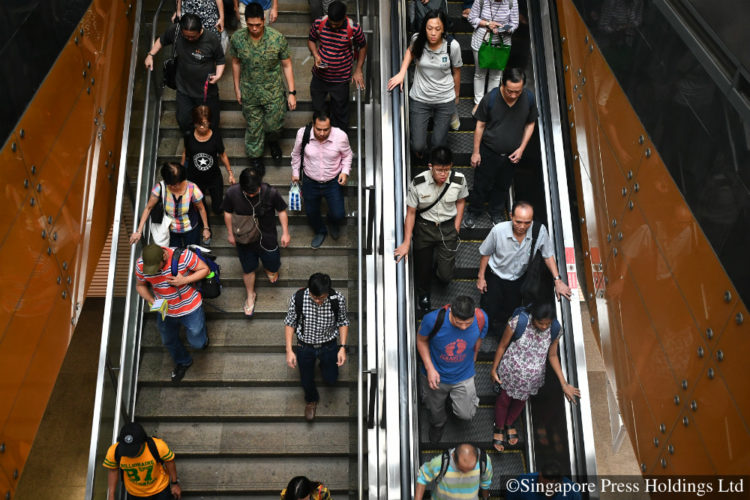 Commuters travelling along the East-West Line (EWL) and North-South Line will experience shorter operating hours over the weekend and full closures on some Sundays in December at 19 stations.

The move will affect 17 stations from Tiong Bahru to Tuas Link on the East-West Line, and Bukit Batok and Bukit Gombak stations on the North-South Line.

Train operator SMRT said at a press conference on Tuesday (Nov 21) that this was done in order to accelerate resignalling works and move the East-West Line onto the new signalling system by June 2018 instead of the end of next year.

Compatibility issues between an old and a new signalling system caused a collision between two MRT trains on Nov 15. The changes were flagged to avoid the risk of a repeat incident by keeping the two systems separated till next June.

This will also mean no train service between Joo Koon station and Gul Circle on the East-West line as a way to keep the two signalling systems separate, till the EWL switches over to the new system.

Here is what commuters need to know and what alternative transport arrangements will be available:

1. SHORTER OPERATING HOURS ON FRIDAYS, SATURDAYS AND SUNDAYS
When: From Dec 8 to 30, train services will end at 11pm on Friday and Saturday at 19 stations – Tiong Bahru to Tuas Link on the East-West Line, and Bukit Batok and Bukit Gombak stations on the North-South Line.

When: From Dec 9 to 31, the first trains at those stations will also start later at 8am on Saturday and Sunday.

Alternative arrangements: Commuters can take parallel bus services – which run along the MRT network – outside affected MRT stations. They will be charged the same fare as if they had taken a train journey.

2. FULL-DAY CLOSURES ON TWO SUNDAYS
When: The 19 stations – from Tiong Bahru to Tuas Link on the East-West Line, and Bukit Batok and Bukit Gombak stations on the North-South Line – will be closed for the whole day on two Sundays – Dec 10 and Dec 17.

Alternative arrangements: Parallel shuttle bus services will be made available on those days. These buses will ply the route the MRT trains will take along the train tracks.

The fares for these shuttle bus services will follow the rail fare structure.

Alternative arrangements: Commuters will have to alight at either stop and take a free shuttle bus to the other in order to continue their journey. They will be charged the same fare as if they had taken a train straight through.

4. REDUCED TRAIN SERVICES ALONG OTHER STRETCHES IN FIRST HALF OF 2018
When: Disruption to services will happen at other stations along the North-South and East-West Lines in the first half of 2018. More details closer to the dates will be revealed.

Alternative transport: Parallel shuttle bus services will run along those stretches as and when train services are affected.