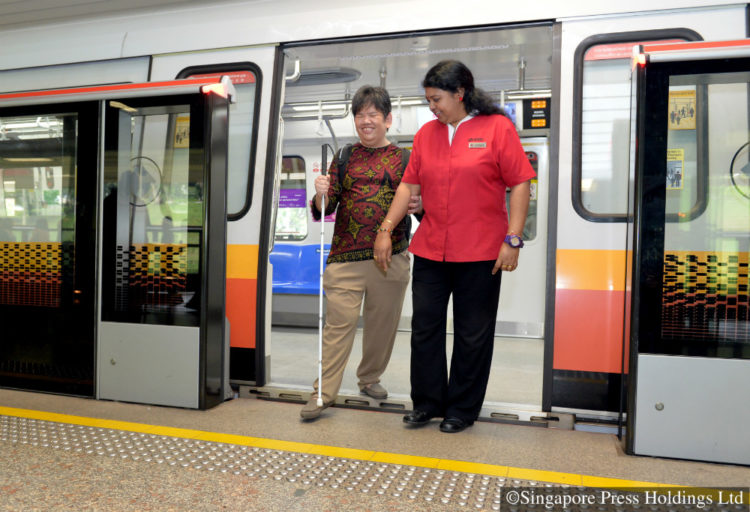 The council is proposing, for instance, that bus captains be trained to look out for commuters with visual disabilities on their routes, and call out bus service numbers to them when they pull up at the bus stop.

It also suggested the development of apps that integrate all public and private transport options door to door for commuters, including those with special needs.

Another recommendation is to have apps provide information on rail disruptions to commuters with hearing difficulties through a video of an avatar signing the information, as a “step up” from text-based alerts, said the council.

These were among the 21 recommendations announced yesterday in the council’s second advisory report to improve the public transport experience. The report took in the views of more than 11,000 commuters through focus group sessions, surveys and in-depth interviews.

Operations manager Francis Tay, 57, who has a visual disability, said having more assistance from bus captains would be a boon.

“We can get other people at the bus stop to tell us which bus is arriving, but sometimes, there is nobody around,” said Mr Tay, who works at SAVH. Mr Tay said that while his mobile device has a screen reader function, allowing him to use transport apps to tell him which bus is arriving, it can be challenging when multiple buses come at once.

The PTC also announced yesterday it will expand its Heart Zone trial, currently at Outram Park MRT station, in which the elderly and those with visual disabilities can go to designated areas so hospital staff or other commuters know they will need assistance getting to the nearby Singapore General Hospital.

The council said Ng Teng Fong and Tan Tock Seng hospitals will take on the same initiative, through a partnership with SMRT at Jurong East and Novena MRT stations by the second quarter of this year .

Besides the suggestions for a more inclusive transport network, PTC had other recommendations to improve rail commutes – such as for station staff to get more training to ease crowding at train doors.

PTC chairman Richard Magnus said a third advisory report is planned for next year, which will focus on buses.

The Land Transport Authority said it will work closely with the public transport operators to look into how the PTC’s latest recommendations can be adopted.

Tower Transit said many of its bus captains already announce service numbers to passengers with visual disabilities at bus stops, but it will be looking to make this practice more consistent.

Meanwhile, SMRT said it has, since October, been training staff to understand the needs of commuters with special needs.

SBS Transit said that since 2012, it has stepped up training for staff to help commuters on wheelchairs, the elderly, individuals with autism and those with disabilities.