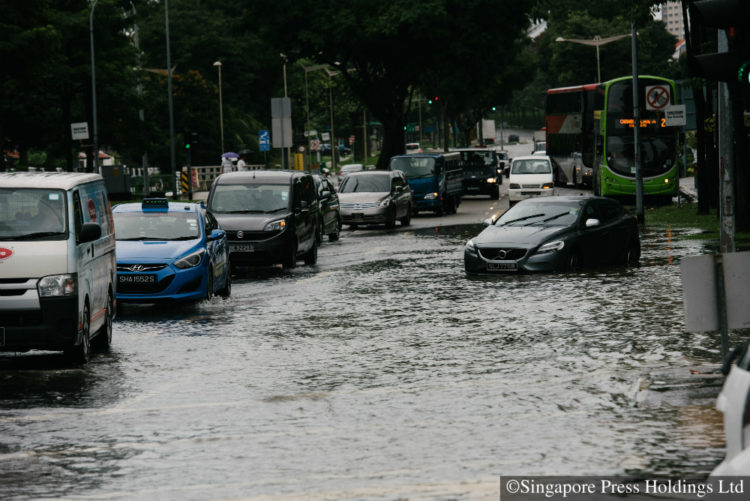 Heavy rains in Singapore causes flooding at junction of Upper Changi and Bedok North Ave 4. Waters were highest at waist-level and receded at 10.20am.

Flash floods caused by heavy rain earlier on Monday morning (Jan 8) subsided at about 10.30am, according to a Facebook post by national water agency PUB at about 11.30am.

Moderate to heavy thundery showers fell over many parts of Singapore for about three hours.

“PUB activated its operations teams to the flooded locations to investigate and render assistance where possible. The public should exercise caution and avoid stepping into or driving into flooded areas,” added the post.

Water levels in several waterways, such as Sungei Tongkang, Sungei Kallang and Bedok Canal were close to being full, with the PUB issuing “high flood risk” alerts for them.

Mr Mohammad Firdaus, 33, said the junction of Upper Changi Road and Changi South Lane was flooded with water that reached knee levels. While big lorries and buses could move through the water, “one of the cars looked to be stuck in the water”.

The delivery driver, who has been working at a warehouse nearby for the past nine months, said: “This is the first time I’ve seen such bad flooding.”

Elsewhere, a multi-storey carpark at Block 613A, Ang Mo Kio Avenue 4, was hit too by the heavy downpour, according to Mr Gary Haris, a senior business development manager.

The 43-year-old told The Straits Times that he saw water of ankle-high levels rushing down the stairwells. “I had to roll up my pants, take off my shoes and walk barefooted,” he added.

Another unlucky driver was Mr Ricky Ng, 50, whose car stalled in the flash flood in Bedok North Avenue 4 at 8.45am.

“The engine just died and the SCDF (Singapore Civil Defence Force) had to push it – along with eight to 10 other vehicles – to higher ground near the fire station,” said the head of an IT company.

According to the Meteorological Service Singapore’s forecast, rainy weather is expected in the first half of January, with rainfall expected to be above normal levels.