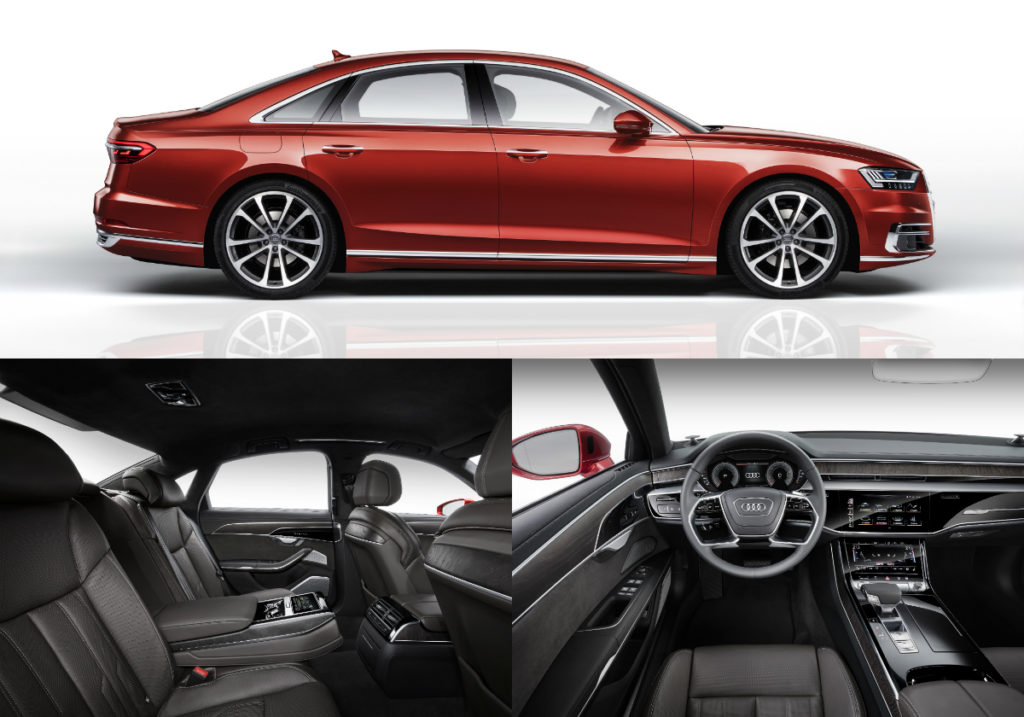 The Audi A8 is stylistically defining – it signals the dawning of a new design era for the entire brand. The front end with the wide, upright Singleframe grille and the fluid, muscular body symbolise sporty elegance, sophistication and progressive status. The luxury saloon possesses a powerful presence – whether in the 5.17m standard version or the A8L, which has a 13cm longer wheelbase.

Freedom is the defining design feature with a new luxury slant. This explains the A8’s resemblance to a lavish, spacious lounge. Compared to the predecessor model, it has grown substantially in length in both body versions. The range of equipment and materials is extensive, with every detail radiating superlative bespoke quality – from the perforation in the seat upholstery to the electrically opened and closed shutters on the air vents.

The limousine’s interior deliberately adopts a reductive design; the interior architecture is clear and with a strictly horizontal orientation. Audi carries its high quality standards into the digital age with a radically new operating concept. It does away with the familiar rotary pushbutton and touchpad of the predecessor model. The instrument panel is kept largely clear of buttons and switches. At its centre is a 10.1-inch touchscreen display which, when off, blends almost invisibly into the high-gloss black surround thanks to its black-panel look.

The new A8 is the first production automobile to have been developed specially for highly automated driving. The Audi AI traffic jam pilot takes charge of driving in slow-moving traffic at up to 60km/h on expressways where a physical barrier separates the two carriageways. The system is activated using the AI button on the center console.

The new A8 range starts out with two extensively re-engineered V6 turbo engines: a 3.0 TDI and a 3.0 TFSI. The diesel develops 286bhp, and the gasoline version 340bhp. Two 8-cylinder versions – a 4.0 TDI with 435bhp and a 4.0 TFSI with 460bhp – will follow. The exclusive top engine version is the W12 with a displacement of 6 litres.

The original 1994 Audi A8 was the first saloon with an all-aluminium body.