Automobile safety systems can only help with the "right mindset" | Torque
Loading posts... 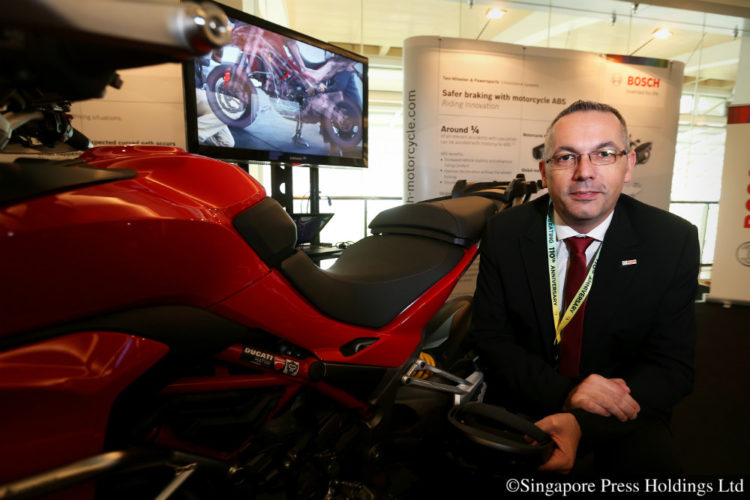 Mr Klaus Landhaeusser at a display showing how virtual reality and augmented reality can help mechanics and technicians learn about the systems used in motorcycles like the Ducati Multistrada above. In the background is an X-ray model of the Ducati but with Bosch’s hardware highlighted to technicians who have goggles on.

Imagine losing consciousness after crashing your car on a secluded stretch of road at night. While the situation sounds dire, your car may have already “dialled” for help.

In Europe, it is now mandatory for all new cars built from March next year onwards to be equipped with the eCall technology, which automatically relays a car’s location to emergency services, said Mr Klaus Landhaeusser, Bosch’s general manager of automotive sales for South-east Asia.

He spoke to The Sunday Times on the sidelines of the Automobile Association of Singapore (AA) Safe Driving and Mobility Conference 2017 held at the Marina Bay Sands Expo and Convention Centre.

Technologies like the eCall system are being studied by the Singapore Civil Defence Force.

“Like all new systems, it needs some time (for consumers) to learn and trust it,” said Mr Landhaeusser, 48.

The company’s work can be seen in high-end cars and motorcycles alike, from traction control, cornering anti-lock braking system (ABS) and collision avoidance, to launch control systems. Such systems depend on sensors which measure wheel speeds, braking and throttle inputs, before simultaneously deploying safety measures to help you regain control of your vehicle in a near-accident situation.

Earlier, AA president Bernard Tay told delegates at the conference that World Health Organisation figures showed that globally, about 1.25 million people die a year as a result of road accidents. Road traffic injuries are the leading cause of death among people aged between 15 and 29.

Mr Tay said: “All the available safety systems can help you only if you have the right mindset that’s in tune with safe motoring habits.”

Research by Bosch showed that about 50 percent of fatal accidents in South-east Asia involved motorcycles. Two-wheeler crashes can be reduced if a motorcycle is equipped with ABS because of the shorter braking distance and lower chance of skidding, Mr Landhaeusser said.

On display at the Bosch booth yesterday were new technologies in use in Europe by emergency services and mechanics.

Using augmented reality, an app tells firefighters and rescuers which areas to avoid cutting when rescuing a trapped driver in a smashed-up car. The rescuer just needs to point a mobile phone or tablet at the car and the app instantly recognises the car model and displays key areas like fuel lines.

Mr Landhaeusser hopes that one day, safety technologies can benefit lower-income groups like riders of smaller-capacity motorcycles. But before that happens, it would require government support and awareness for consumers, he said. 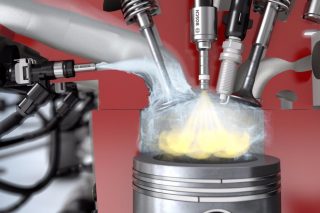 Water injection: A super-cool way to to get better fuel economy

Water injection: A super-cool way to to get better fuel economy