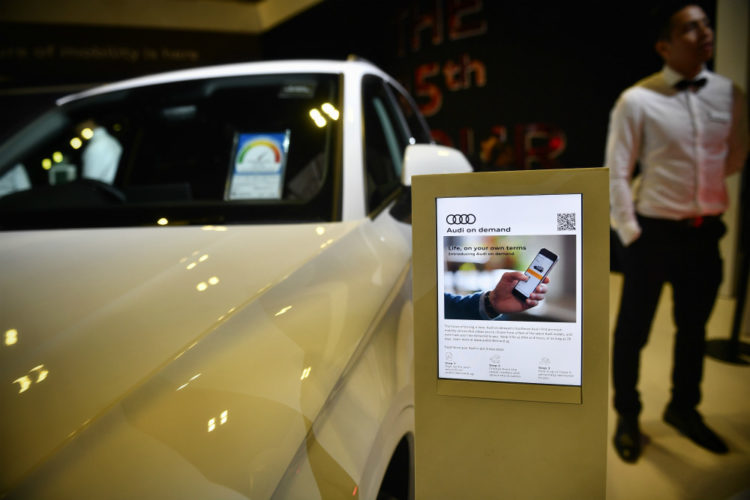 Audi launched the Web-based Audi On Demand yesterday, which is targeted at people who want to use a car but do not want to buy one.

In another sign that car ownership may be on the wane and mobility services on the rise, German carmaker Audi yesterday launched a short-term rental business targeted at people who want to use a car but do not want to buy one.

The company’s Web-based Audi On Demand offers a range of the brand’s latest models from $76 (for the A3 sedan) to $244 (Q7 sport utility vehicle), per four-hour slot.

In the wake of phone-hailed ride providers such as Uber and Grab, several carmakers have started offering their own mobility services. They include Ford, Honda, BMW and Daimler. Others like Hyundai and Toyota have taken a passive route by investing in Grab.

Audi, like a number of other auto manufacturers, now sees itself as more than a vehicle maker.

Latching onto the term “mobility service”, Mr Mannering said Audi is taking the concept further with Audi AI – an artificial intelligence-driven driverless fleet. One day in the future, users can summon and ride in a driverless car from Audi as well as other manufacturers.

Describing the new rental concept as a way of reaching out to potential new customers, Mr Mannering said: “It is not a very strong business case in itself, but we see it as a great way of getting people to drive our cars.”

He said that when the Audi On Demand portal went live last month before yesterday’s official launch, “someone found it”.

“He booked a TT for a few days, and ended up buying one.”

Mr Mannering said the range consists of 10 mainstream models, but could periodically include “a surprise model” – such as the R8 supercar.

The service has two other tiers: a concierge service which delivers and picks up the car, and a full chauffeured service.

Audi is offering a 30 percent discount to Singapore Motorshow visitors, which means a little over $53 for an A3 slot, or $13 per hour.

This year’s show, its 13th edition, opened with more than two dozen new model unveilings – the biggest number ever.

The list includes an electric Hyundai, set to offer affordable electric mobility, and a seven-seat version of the Toyota Prius, the world’s most popular petrol-electric hybrid.

Despite the uncertainty of a new emission tax scheme, there are 25 car brands showing off 170 cars at this year’s show.

The event at the Suntec convention centre runs till Sunday, with tickets at $6, and free entry for children below 1.2m.

Static exhibits aside, British stunt driver Russ Swift – a regular attraction at the show – will show off his latest precision driving manoeuvres.