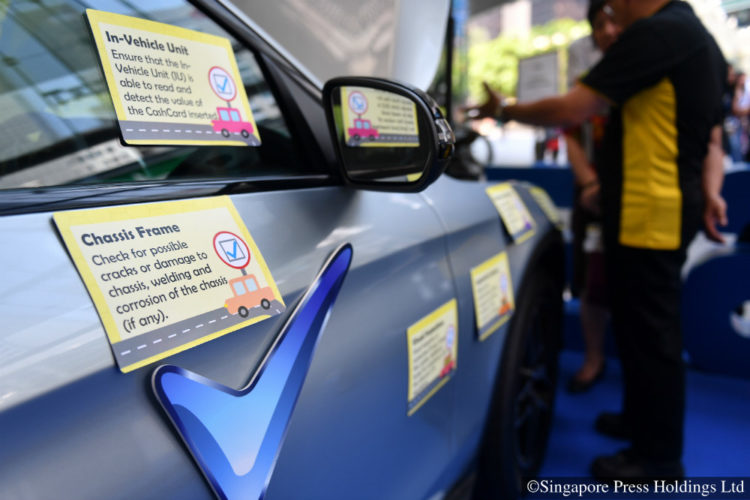 The Consumers Association of Singapore (CASE) launched the Standard and Functional Evaluation (SAFE) checklist for pre-owned cars at the CASE ‘Motoring and You’ Roadshow at Chevron House on16 March 2017. Stickers on a car show some of the items a buyer should look out for when buying a second-hand car.

Used-car buyers can refer to a new checklist to have a car thoroughly inspected before buying it.

Developed by the Consumers Association of Singapore (Case) with motoring industry partners, it helps to address the rising number of car complaints, which relate mainly to used cars with defects.

The checklist is an updated and more comprehensive version of the one distributed to Singapore Vehicle Traders Association (SVTA) members in 2012.

Consumers may download the new two-part Standard and Functional Evaluation (Safe) checklist from the Case and sgCarMart websites.

The first part, to be completed by the dealer and signed by both parties, comprises details of the car and basic functional and visual checks that dealers should go through with the consumer during a pre-sale inspection.

The second part lists minimum checks performed by professional evaluation centres such as Vicom, STA Inspection and the Automobile Association of Singapore.

While the checks are not mandatory, Case advises consumers to walk away if dealers are reluctant to go through the checks with them.

The car industry remained the top source of complaints to the consumer watchdog for the fifth year in a row last year, with grouses about defective cars making up half of the 2916 complaints.

Seven in 10 of car-defect complaints are from consumers without an evaluation report from an inspection centre, making it difficult to establish the condition of the car when it was bought, Case said.

The cost of an evaluation report is $150 to $200 on average and is typically borne by the buyer, though negotiations can be made for dealers to foot the bill, said Case executive director Loy York Jiun.

Having a thorough inspection helps buyers to have peace of mind and avoid costly repairs and disputes down the road, he said.

The SVTA will be making the Safe checklist available to its 380 members, mostly used-car traders.

It is also tapping funds from Spring Singapore to encourage more members to participate in the CaseTrust-SVTA accreditation scheme by offsetting the cost of joining, said SVTA’s first vice-president Raymond Tang.

There are currently 35 used-car traders on the scheme, which subjects participants to an audit by Case, among other requirements.

“By encouraging our members and consumers to use this checklist and support CaseTrust dealers, we hope to cut out the black sheep and reduce complaints,” said Mr Tang.

Mr Santhosh Arumugam, 33, who works in finance, said that he plans to buy a second-hand car.

“I’m nervous about what to expect but it’s useful to have this checklist so you know your rights and what to look out for,” he said.

Here are some of the checks that buyers should go through with second-hand car dealers before purchasing a car:
•Check that the headlights, headlamps, indicators and hazard lights are working.
•Ensure that the air-conditioning remains cold for a prolonged period after being turned on.
•Test that the in-vehicle unit (IU) is able to read and detect the value of the card inserted.
•Ensure that the windscreen wipers can function at different speeds and that there are no abnormal sounds.
•Wind the windows up and down and check that there are no abnormal sounds.
•Sound the horn.
•Do a visual check of the car’s bodywork, tyres and rims.