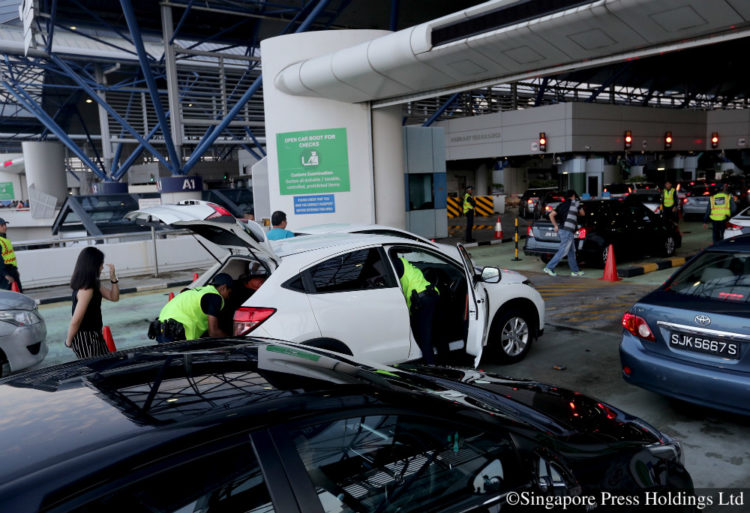 During a media tour, ICA officers showed reporters how checks are being conducted.

Immigration and Checkpoints Authority (ICA) officers will be able to conduct searches of suspicious people at immigration checkpoints and also arrest them, with the passing of the Immigration (Amendment) Bill on Monday (Jan 8).

The officers will be given police powers at and around air, land and sea checkpoints such as Changi Airport, Woodlands and Tuas Checkpoints, and the Marina Bay Cruise Centre, including in the public areas.

Previously, they were allowed to conduct searches only in limited areas, such as when going through the bags of travellers during security checks.

Second Minister for Home Affairs Josephine Teo told Parliament during the second reading of the Bill that the changes to the law “will allow any ICA officer nearest to a security incident at the checkpoints to be the first responder”.

The move comes as the security landscape is becoming more complex and challenging.

Currently, immigration officers who spot suspicious people in the arrival hall of the airport, for instance, have to wait for police officers to conduct searches.

Even then, the police officers can only do so if they have arrested the person or have reason to suspect the person has committed an offence that warrants a search.

This includes being in possession of arms and explosives or controlled substances, for instance.

With the amendments to the law, ICA officers can now respond to these incidents themselves, without having to wait for police officers to arrive.

The police officers too can also search suspicious people without having to arrest them first.

Another change to the law will allow ICA officers to collect personal identifiers – personal information such as photographs, signatures, and images of fingerprints and irises – of travellers who are only transiting through Singapore.

A total of seven MPs spoke during the debate, with many of them raising questions about whether ICA officers should be given similar powers and responsibilities as the police, given that they receive less training and lower salaries.

Mrs Teo said ICA has been working with the police to develop appropriate training courses for their officers, but stressed that ICA officers are not expected to become police officers.

“What this Bill seeks to do is to empower ICA officers, who are usually the majority at the checkpoints, to respond to security incidents within and in the vicinity of the checkpoint,” she said.

On the pay difference, she said the Home Affairs Ministry assesses salaries and career progression holistically, such as when any expansion of duties warrant salary adjustments.

Meanwhile, Mr Louis Ng (Nee Soon GRC) asked if some of the expanded powers of the ICA were really necessary.

With the changes to the law, ICA officers would be able to detain a person for up to a day before handing him or her to the police.

Mrs Teo said this was to give the police more time to take over custody during major emergencies.

She added that police officers will still be chiefly in charge of the subsequent investigations when they arrive at the scene, including the recording of statements from arrested persons and the prosecution of suspects.

However, ICA officers can, at the initial stages of an incident, also record statements from the suspect as well as anyone familiar with the incident, including witnesses, she said, adding that this allows officers to quickly establish the facts of the incident.

Mrs Teo said this allows the ICA and police to work together more effectively as part of the Integrated Checkpoints Command, a coordinated team including both ICA and police officers that manages security at the various checkpoints here.