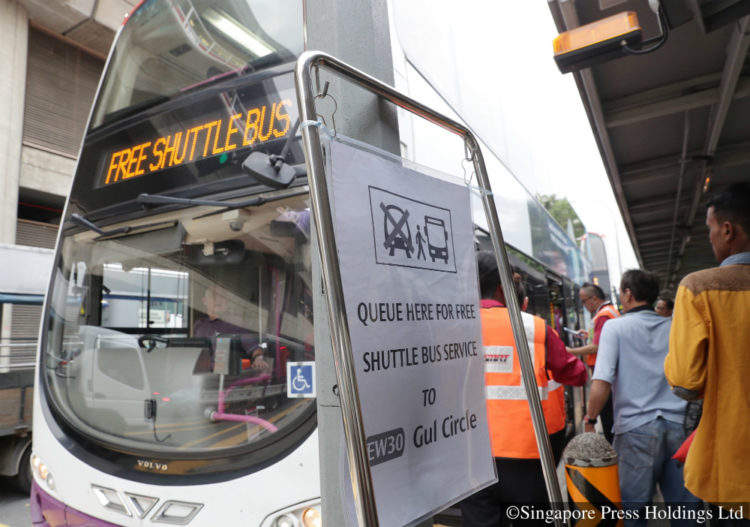 Commuters queue for the free shuttle bus service at Joo Koon MRT station to take them to the next stop at Gul Circle on Nov 20, 2017. Train service between the two stations will remain suspended until mid-2018.

In a press conference on Tuesday (Nov 21), the Land Transport Authority and SMRT announced that 17 East-West Line stations and two North-South Line stations – Bukit Gombak and Bukit Batok – would have shorter operating hours on most Fridays, Saturdays and Sundays next month. .

On these days, service will end at 11pm on Fridays and Saturdays, and start at 8am on Saturday and Sunday, to facilitate resignalling and other renewal and maintenance works.

Project engineer Desiree Tiangco, 27, believes the shorter hours would be inconvenient, especially for those who work on weekends like herself.

She works every Saturday, travelling from Yew Tee to Jurong East by 7am. She said that she might have to take a taxi from Bukit Gombak to Jurong East for a while.

Ms Tiangco said: ” The trains here are the number one transport option for many people, so this is a sacrifice for everyone, but I hope the trains will be better after this.”

Another weekend worker, Ms Grace Fu, 60, a supermarket retail assistant who works in Clementi, will take two buses instead of the train for her journey from Bukit Gombak.

“Although there has been many delays lately, trains are still faster. The bus has to stop much more often,” she said.

In Tuesday’s press conference, it was also announced that the suspension of train service between Joo Koon and Gul Circle stations will continue until mid-2018.

Sales administrator Cindy Tan, 33, who works near Gul Circle station, said: “I’m disappointed with this disruption, because we only managed to enjoy the Tuas West Extension for about five months before the collision happened last week.

“There’s usually a jam near Gul Circle in the morning and evening peak hours, so it’s a headache to commuters that this non-service will continue until next year.”

Mr Sitoh Yih Pin, chairman of the Government Parliamentary Committee for Transport, said the early closures were “definitely worth a try” if it allowed maintenance work to be completed more quickly, and thus reduce the frequency of delays.

“This could alleviate some of the frustrations our commuters face as we work hard towards completing the resignalling works,” he said.