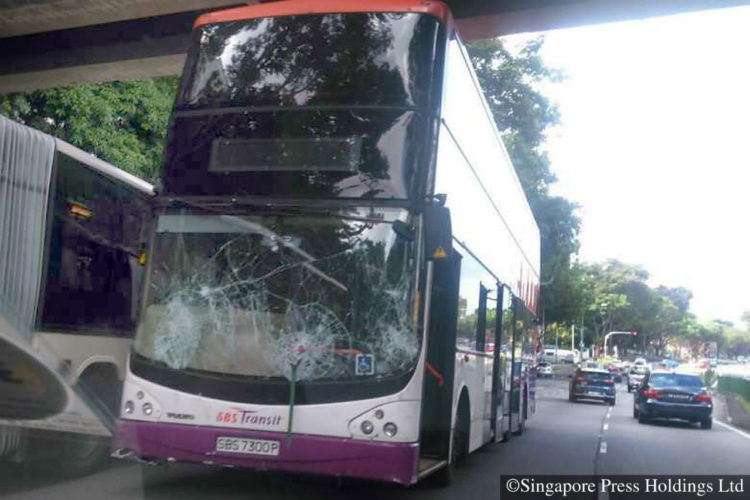 The windscreen of the bus was cracked after the incident.

A double-decker bus ended up on the wrong side of the road after its driver suffered a dizzy spell and drove against traffic along Yio Chu Kang Road towards Serangoon Central on Friday (July 7) morning.

Video footage of the incident was circulated on social media, which showed the SBS Transit bus stationary in the middle lane and facing traffic.

Its front windscreen appeared badly damaged, and its front bumper was scratched and broken. A green metal rod appeared to be stuck in one of the cracks in the windscreen.

In response to queries from The Straits Times, SBS Transit’s senior vice-president of corporate communications Tammy Tan said the service 72 bus was travelling along Yio Chu Kang road at around 10am when the bus captain “suddenly felt dizzy for a few seconds”.

During that short period, the bus veered from its path and ended on the other side of the road.

Ms Tan said the bus captain recovered within seconds and brought the bus to a halt.

“We are extremely thankful that no passenger was hurt as a result. We would also like to thank a gentleman on board who had extended care and assistance to our bus captain,” she added.

The Singapore Civil Defence Force said they responded to the incident and dispatched an ambulance to the scene. The 54-year-old bus captain was taken to Tan Tock Seng Hospital in a conscious state.

According to Ms Tan, the bus captain is currently undergoing tests in the hospital. He had been certified fit to drive after his annual medical review last month.

“We are in close contact with him while he is receiving medical attention,” she added.