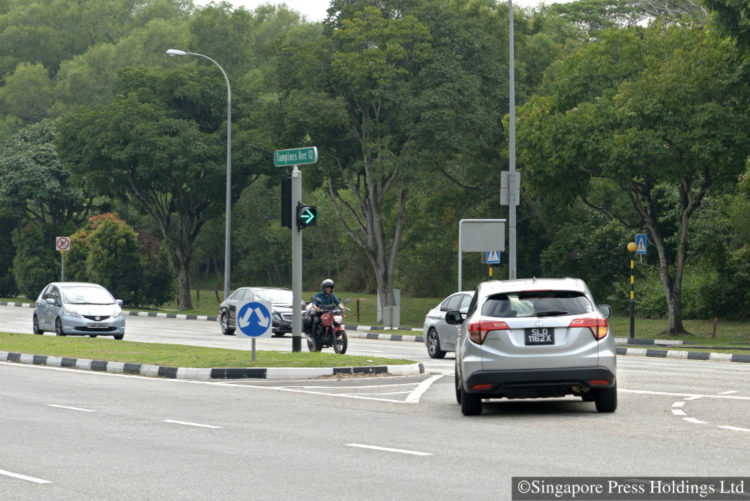 After viewing footage from a driver’s in-car camera, the High Court accepted her contention that she had caused a road accident as a result of being confused by the “unusual” signals at a traffic junction, cutting her sentence from a week’s jail to a day’s jail and a $5000 fine.

Housewife Lee-Teh Har Eng, 57, had pleaded guilty to a charge of causing grievous hurt to a 56-year-old motorcyclist at about 8pm on Jan 18 last year.

She admitted that she failed to keep a proper lookout when turning right from Tampines Avenue 12 into the slip road of Tampines Expressway towards Seletar Expressway, causing a collision with an oncoming motorcyclist who had the right of way.

Teh had said in her mitigation that she was unfamiliar with the area and had made the turn as she was under the impression that she had the right of way.

The only traffic lights on her side of the road was a single green arrow to turn right, without red and amber signals. She said as she approached the junction, the green arrow was in her favour and a car about 20m in front of her made a right turn.

She intended to follow suit as there was no red light against her and vehicles on the opposite side – Tampines Avenue 12 towards the Pasir Ris Flyover – were stationary, waiting for the light to turn green in their favour.

In the dark, she said, her judgment was affected by another green light ahead – which turned out to be the “green man” light for pedestrians.

Teh said she was about to complete the right turn when Mr Charles Lo Weng Kwong came bearing down on the left side of the car. As a result of the collision, Mr Lo, a pastor, was flung off the bike, suffering wrist and leg fractures and was hospitalised for more than a month.

In May, a district judge said Teh’s explanation was “illogical” and sentenced her to a week’s jail, ruling that the degree of her negligence was high.

Teh appealed to the High Court.

Her lawyer, Mr Tan Hee Joek, submitted footage from her in-car camera capturing the accident and argued that the traffic junction was unusual.

Mr Tan also argued that his client had shown deep remorse after the accident. Teh, who shared the same faith as Mr Lo, visited him in hospital, sent him prayer messages and got her care group to pray for him.

The lawyer also highlighted her clean driving record of 27 years.

After viewing the footage, Judicial Commissioner See Kee Oon concluded that Teh was not grossly negligent and accepted her contention that she was confused.

“This appears to be a case involving an inadvertent but regrettable lapse of attention,” he said. The most likely cause of her confusion was her distraction and disorientation in an unfamiliar set of road conditions and an unusual traffic signal setting, he said.

He also took into account the “extremely high” level of remorse towards the victim, who has forgiven her.

Related story: Device to track drivers’ habits could reduce accidents and insurance premiums
Related story: E-bikes are everywhere and drivers must learn to live with them