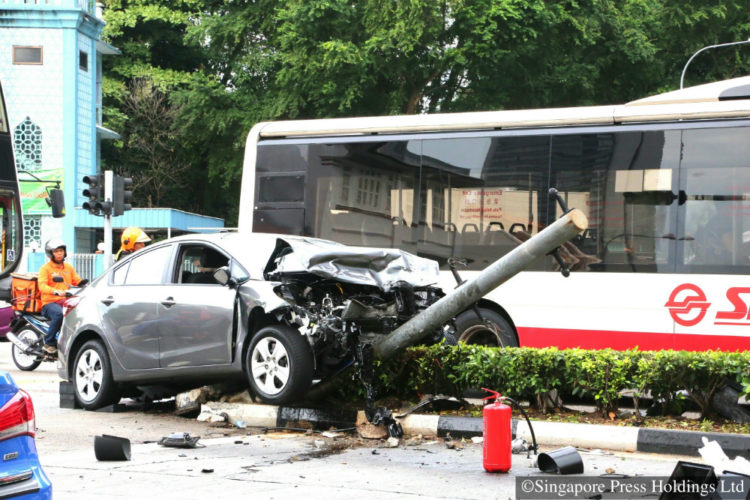 A grey sedan hit a traffic light, causing it to topple over, during an accident at the junction of Victoria Street and Jalan Sultan on 11 December 2016.

Eight people were injured after two cars collided at the junction of Victoria Street and Jalan Sultan on Sunday morning (Dec 11).

The accident occurred at around 8am, when a grey sedan travelling along Victoria Street crashed into a black MPV travelling on Jalan Sultan, in the direction of Syed Alwi Road.

Chinese daily Lianhe Wanbao reported yesterday that the driver of the sedan suddenly lost control of his vehicle before hitting a traffic light at the junction, which caused it to topple over.

The impact of the crash crumpled the bonnet of the sedan.

The crash caused the MPV to skid out of control before ending up on the second lane of Victoria Street in the direction of Lavender Street, in front of Hotel Boss. The front right door of the MPV was badly damaged, and the front right wheel was dislodged.

As a result of the accident, one of the cars hit a pedestrian, believed to be a 71-year-old woman.

The Singapore Civil Defence Force was alerted to the accident at 8.15am and sent a fire engine, a Red Rhino, five ambulances and two support vehicles to the scene.

A police spokesman said the eight victims, aged between 20 and 71, were taken to hospital following the accident. Seven were taken to Tan Tock Seng Hospital and one to the Singapore General Hospital.

The Straits Times understands that the victims included one pedestrian, as well as the driver and the six passengers of the grey car.

The police directed traffic at the junction, amid spilt oil and wreckage from the accident, as bystanders gathered to watch.

Eyewitnesses said one injured man’s clothes were smeared with blood and he had a bandage wrapped around his head. Another victim, lying on a stretcher, wore a head brace and had bandages on his arm, legs and abdomen.

Passers-by, including the occupants of two cars who stopped to offer assistance, helped the injured. The police said investigations are ongoing.

In 2012, three people died and two were injured when a Ferrari hit a taxi after beating a red light at the junction of Victoria Street and Rochor Road, about 1km away from the scene of yesterday’s accident.