Traffic jams up to 8 hours at both checkpoints | Torque
Loading posts... 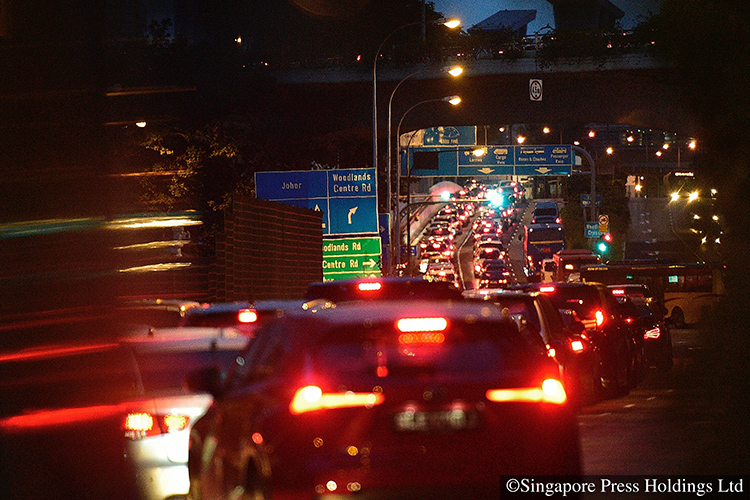 Traffic jams at Exit 10B near Woodlands Checkpoint on Saturday evening, 15 December 2018.

However, traffic appeared to improve on Sunday.

But one person caught in a traffic jam that stretched eight hours on Friday evening was a 30-year-old traveller, who only wanted to be known as Ms Winnie H. and goes to JB every weekend.

Ms Winnie, who has family in Malaysia and works in the IT sector, told ST that she had been stuck in traffic at the Tuas checkpoint from 4.30pm on Friday afternoon. She only managed to drive into JB around 12.30am on Saturday.

The traffic had backflowed to the Coca-Cola factory along Tuas Avenue 8 when she joined the queue on Friday afternoon, and she only moved about 100m after one and a half hours.

While the jam on Saturday was not as bad, she took about two hours to get through the Tuas Checkpoint at about 5.15pm.

“Previously, the Singapore checkpoint would take about one and half hours around the 6pm to 7pm peak period, and an hour or less after that. It’s usually relatively empty at Tuas Checkpoint before 5pm,” Ms Winnie said.

“Sadly, nowadays, even a short queue takes about one hour.”

Going by comments from several travellers, traffic jams are par for the course during the year-end period compared with other times of the year.

Said one traveller Ikhsan Putra Ibrahim: “I was stuck for four hours, which I had somewhat expected given it’s the weekend and December.”

Mr Ikhsan, 30, joined the queue at Tuas around 6.15am, and only got through customs at around 10.15am. He was travelling to JB to attend a wedding at 12pm, and was fortunately able to make it in time.

Neither Mr Ikhsan nor Ms Winnie were able to relax while waiting for the queues to move at the checkpoints, despite the slow traffic, as they had to be alert for potential queue-cutters.

Mr Ikhsan said that there were many cars trying to cut the queue at the entrance where the traffic police were stationed, and some of them were successful, although most of them were rebutted with angry horns from queue-abiding motorists.

“If not for the traffic police, things might have gotten quite messy,” Mr Ikhsan added.

According to ICA’s Facebook page, traffic arriving and departing both the Tuas and Woodlands Checkpoints has been heavy since 6.20pm on Friday.

Further updates by ICA at 8.20am and 2.05pm on Saturday reaffirmed the heavy traffic to and from Singapore, with delays expected.

The police and the Singapore Civil Defence Force said that they were not alerted to any accidents that could have caused delays to the queues at the checkpoints.

But things got smoother early Sunday morning, with a 2.10am update from ICA that heavy arrival and departure traffic at both Woodlands and Tuas Checkpoints had subsided.

While departure traffic at the Woodlands Checkpoint was again heavy later at 7.35am due to backflow of traffic from Malaysia, ICA said at 4.38pm that this had eased.

Traffic jams at Exit 10B near Woodlands Checkpoint on Saturday evening, 15 December 2018.