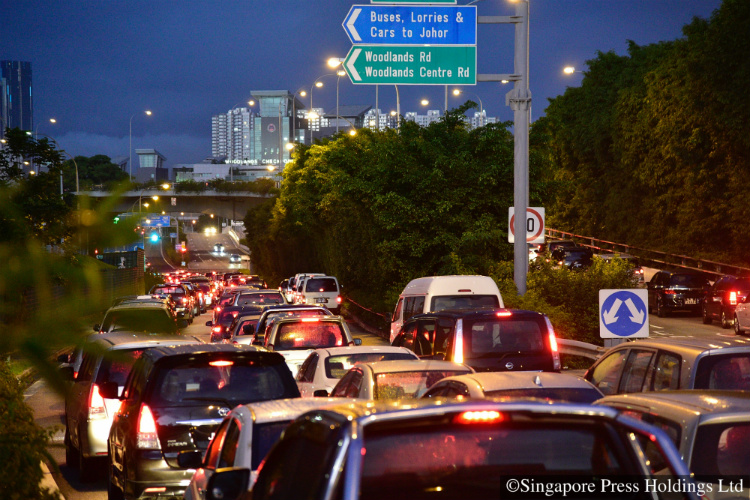 Long lines of vehicles near the Woodlands Checkpoint last Saturday. Several netizens took to the ICA’s Facebook page to complain about the long queues to clear Customs and cross to Johor Baru last weekend.

A bomb hoax, two incidents of cars breaking down and rampant queue-cutting added to the heavy traffic experienced at the Causeway last weekend.

Commuters should continue to expect heavy traffic till New Year’s Day – especially at weekends – at both the Woodlands and Tuas checkpoints, added the Immigration and Checkpoints Authority (ICA) yesterday, as it stressed that security will continue to be its top priority and that checks against potential threats will be stepped up during the festive period.

Several netizens took to the ICA’s Facebook page to complain about the long queues to clear Customs and cross to Johor Baru last weekend.

Some said they were stuck in heavy traffic lasting as long as six to eight hours.

Even moving 100m on the Singapore side took 11/2 hours, related one commuter.

While there were angry complaints about many queue-cutters, some also urged the ICA to open up more Customs clearance booths.

Regular travellers have also noticed much longer waits during weekdays over this period, even when travelling as early as 5am.

Replying to queries from The Straits Times, the ICA said its officers “are working round the clock and doing their utmost to ensure that travellers’ needs continue to be met without compromising security”.

“During this peak period, ICA officers have put in many overtime hours. All our available resources are being used. From time to time, during shift changes or redeployment of officers to other high traffic areas, certain counters may have to be temporarily closed,” it added.

While it monitors the arrival and departure traffic conditions in real time and “adopts a multi-pronged approach in traffic management, including cross-deployment of officers and flexible use of lanes for clearance of conveyances”, travellers also have a part to play.

The heavy traffic last weekend was “exacerbated by motorists who failed to observe lane discipline through rampant queue-cutting”, ICA said.

“Additionally, cars had broken down on the Causeway on two occasions during this period, and there was one bomb hoax incident. These led to severe congestion for both arriving and departing traffic.”

Around 400,000 travellers use the land checkpoints daily, and this increases to about 430,000 during the year-end school holidays and festive periods.

“This year is no exception,” the ICA warned in a statement yesterday.

It will continue to take the necessary measures to improve clearance efficiency as much as possible, “without compromising security”.

Urging motorists to observe lane discipline “at all times”, ICA said: “Our checkpoint officers will continue to monitor arrival and departure traffic conditions and ensure optimal deployment of resources to handle peak-hour traffic.”

“The ICA will also continue to work with the Traffic Police to ensure road discipline at the critical junctions leading to the land checkpoints.”

It advised motorists to better plan their journeys, and to check ICA’s Facebook page and information from traffic cameras available online on the prevailing traffic situation at the checkpoints.

The ICA also reminded travellers not to bring in prohibited items such as firecrackers, pop-pops or little firecracker boxes, and chewing gum.

If they bring in dutiable or controlled items such as meat products and potted plants, they should “proactively” make declarations prior to checks.

“The ICA strives to ensure expeditious checkpoint clearance for all travellers.”

“However, security must still be our top priority. We seek travellers’ patience and understanding in this,” it added.