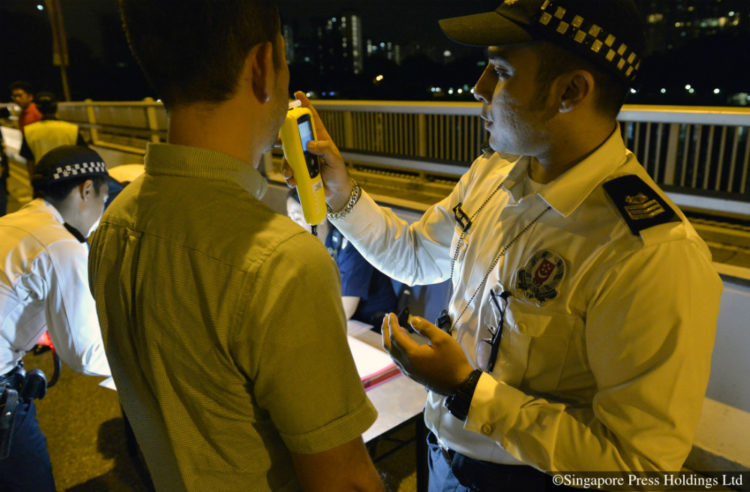 A driver going through a breathalyzer check by a traffic police officer at a road block along Nicoll Highway on 24 July 2014. 17 motorists failed the breathalyser test in a four-hour islandwide operation and were nabbed by the Traffic Police.

There have been fewer drink-driving related accidents, casualties and arrests in the first half of this year compared to the same period in 2015, Traffic Police statistics showed.

The total number of such accidents dropped from 81 from January to June in 2015 to 70 in the same period this year, with fatalities dipping from eight to three although injuries rose from 102 to 109.

Said Traffic Police head of operations Ho Yenn Dar: “There has been a continued decrease in the numbers due to the traffic police’s three-pronged approach towards drink-driving – education, engagement and enforcement. People are more responsible now.”

He added that the traffic police have seen more people engaging valet services or taking taxis rather than driving when they go out for drinks.

The authorities carry out regular anti-drink driving operations as well, he said. Larger-scale ones involve a mobile breath evidential analyser test centre. Rolled out in April last year, it shortens the time needed to get an accurate test results from drivers suspected of exceeding the legal alcohol limit.

A total of 77 drivers were stopped and tested at various road blocks in the wee hours of Thursday (Oct 20), including one in Clemenceau Avenue, observed by The Straits Times between 1am and 3am.

Among them, 15 men and three women aged between 22 and 58 were arrested for drink-driving, with the highest breath evidential analyser test result at 63 microgrammes of alcohol per 100 millilitres of breath.

This is almost double the prescribed legal limit of 35 microgrammes.

Drivers who do not pass an initial test indicating if they have taken alcohol are ushered to a desk to blow into a handheld breath analyser. This will show if they pass, receive a warning, or fail again. Those who fail are then taken to the mobile test centre for a more accurate reading.

If convicted, drink-drivers will be disqualified from driving for at least 12 months. First-time offenders may be fined between $1000 and $5000 and could have their licences disqualified for up to 48 months.

Repeat offenders could get a maximum fine of $30,000 and up to three years’ jail and up to six strokes of the cane.