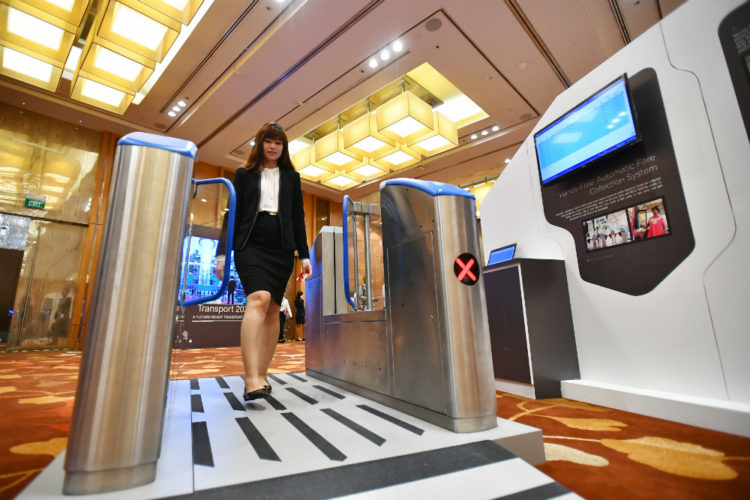 Breezing through the fare gates at an MRT station – without the need to tap in or out with a travel card – could be the reality for Singapore’s public transport system in the future.

Fares will be paid automatically via a commuter’s mobile device using Bluetooth technology, or with a radio-frequency identification (RFID) card he carries.

This “hands-free” fare gate, which will be tested at selected train stations in 2018, is among several innovations being displayed at the Future of Transport showcase, held at the Sands Expo and Convention Centre at Marina Bay Sands.

The exhibition, which depicts the Republic’s vision of the future of air, land and sea transport, is organised in conjunction with the 23rd Asean Transport Ministers Meeting. The two-day event kicked off on Thursday (Oct 12) and is chaired by Singapore this year.

At the showcase, transport delegates and officials from the region were given a broad overview of innovations, such as the use of data analytics and autonomous technology for operations at the future Tuas Terminal mega port.

They were also briefed on ongoing trials being conducted for the use of autonomous vehicles in providing point-to-point, on-demand passenger transport.

Demonstrations involving the use of robotics and autonomous technology for ground-handling operations at the airport were also performed by Sats.

These included a food-delivery autonomous guided vehicle called Dolly, which staff can use to move multiple food trolleys from kitchens to airport lounges.

A smart wheelchair system, which allows airport staff to move a convoy of wheelchairs autonomously, was also showcased.

Sats also displayed, for the first time, an on-trial autonomous guided vehicle called the Caddy, which can be used to deliver documents from airport terminals to aircraft.