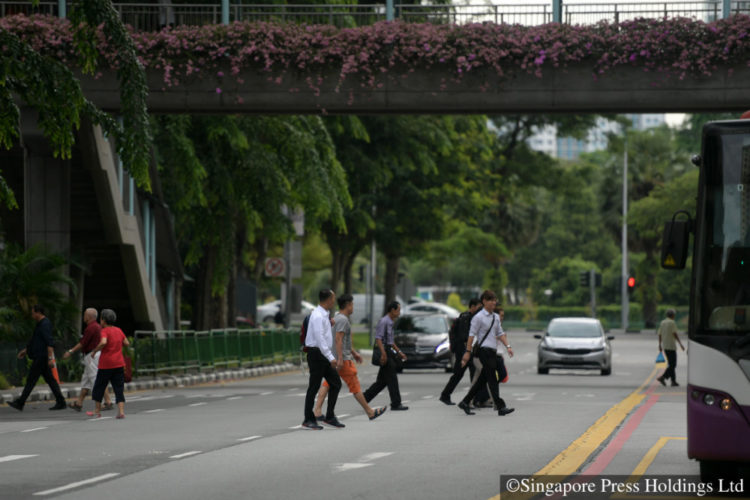 About 30 percent of jaywalking accidents in the first half of this year involved seniors. Six of them were fatal.

This is despite agencies here improving infrastructure and stepping up education for older pedestrians. In 2009, the Land Transport Authority (LTA) introduced the Green Man Plus scheme, allowing senior citizens and pedestrians with disabilities more time to cross the road when they tap their cards on a card reader on traffic light poles.

In 2014, LTA announced its Silver Zone programme, which has since been rolled out in at least nine residential estates with sizeable elderly populations. These areas are given special road safety features, including new road signs, two-stage pedestrian crossings and extended green man timings. Speed limits are also lowered where feasible. By 2023, there will be 50 such zones islandwide.

Last year, the Traffic Police launched the Road Master Test Kit in a bid to educate elderly pedestrians on road safety, encouraging family members to remind seniors not to jaywalk.

But the elderly remain a vulnerable group. Experts have suggested introducing more elderly-friendly features, such as making overhead bridges less steep and wider, to discourage jaywalking. This could be done in more areas islandwide, in addition to the existing Silver Zones.

Public awareness efforts could be extended to other road users such as drivers, to help them be more conscious of pedestrians. But all pedestrians need to be mindful, not just the elderly, and curb the instinct to choose convenience over safety.

There were 248 accidents involving jaywalking last year, up from 195 in 2014, with fatalities almost doubling from 13 to 25 in this period.

Infrastructure may help to alleviate the situation, but pedestrians of all ages have to recognise that they too play a part in keeping the roads safe for all.