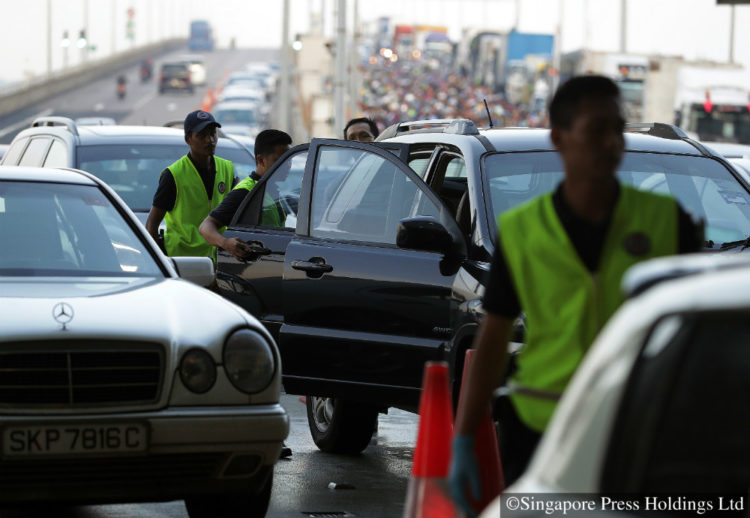 With Christmas and the new year approaching, the lines of vehicles at the Tuas and Woodlands checkpoints will be predictably long.

Still, the Immigration and Checkpoints Authority (ICA) hopes to make clearances as painless as possible – with some help from travellers.

About 430,000 people – 30,000 more than usual – are expected to clear the two checkpoints daily during the December school holiday period.

It does not help that between January and October this year, some 600 cases of Singaporeans using wrong passports, and more than 3000 cases of foreigners arriving with expired, invalid or no travel documents, were discovered at these two border controls.

“These cases will lead to delays because we have to conduct checks on them to make sure that they have no malicious intent,” said Superintendent Muhammad Nagib Ali, Senior Assistant Commander at Tuas Checkpoint, yesterday.

Among the problems that ICA officers hope to avert is “ballooning” – which happens when motorcyclists jump the queue and spill over to other lanes, blocking cars.

To cope with the challenges, especially amid the rising terror threat, officers are doing more checks and allocating resources accordingly.

On a media tour yesterday morning, officers showed how they converted one clearance zone that is usually reserved for cars to clear motorcyclists coming into Singapore, who form the bulk of the daily morning traffic.

Decisions to convert zones are the result of close monitoring of queues on a real-time basis, Supt Nagib said. He added that there are a variety of ways to manage traffic.

Officers also check cars and heavy vehicles for contraband items ranging from drugs to hazardous materials that can be used to make dirty bombs. About 36,000 contraband cases were uncovered during such checks between January and October this year.

At the cargo-clearing area, scientists from the Ministry of Home Affairs’ Office of the Chief Science and Technology Officer can conduct checks for radiological, chemical and explosive materials.

He added: “We’re all doing our best to keep wait times within reasonable limits.”