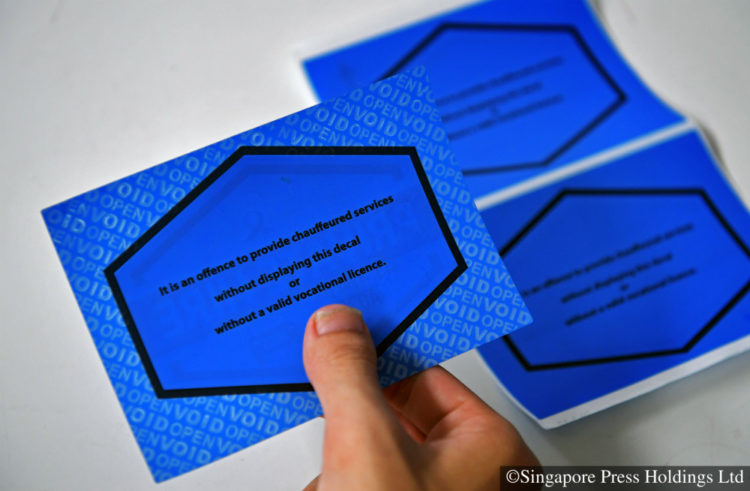 Use of decals by Grab to indicate the Private-Hire Car Driver have applied for their Vocational Licence. The word “void” appears on both sides of the tamper-evident decal once it is peeled off, to prevent it from being reused.​

The Land Transport Authority (LTA) has lodged a police report against a Carousell user offering to modify decals used by private-hire drivers so they can be removed.

The Carousell user – dd740 – had put up his listing on July 11, 10 days after the requirement to put up the decal kicked in, reported Today newspaper on Wednesday.

For $30, dd740 offered to modify the decal so that it could be removed without showing signs of having been tampered with.

The 14cm by 10cm plastic decal – about twice the size of a road-tax disc – must be stuck on the front and rear windscreens of private-hire vehicles. The decal is tamper-evident and is supposed to show the word “void” if it has been removed and reattached.

The Carousell user claimed in the post that his modified decal would let drivers “remove and paste it back easily” without showing the “void” word.

The post has since been taken down but the service provider can still be found on the marketplace app. His other active listings offer renovation services and consultation services for fengshui.

An LTA spokesman said that the decals should be affixed or replaced only at LTA’s appointed centres. LTA added that failure to affix or display these decals, or any form of tampering, defacement, altering, covering or obscuring of the decals are offences under the Road Traffic Act.

As of the end of last month, 23 drivers have been caught obscuring or altering their decals or operating chauffeur-driven private-hire cars without decals.

Forging the decal would also be an offence under the Road Traffic Act. Offenders may face a fine of up to $5000 or a jail term not exceeding 12 months, or both.