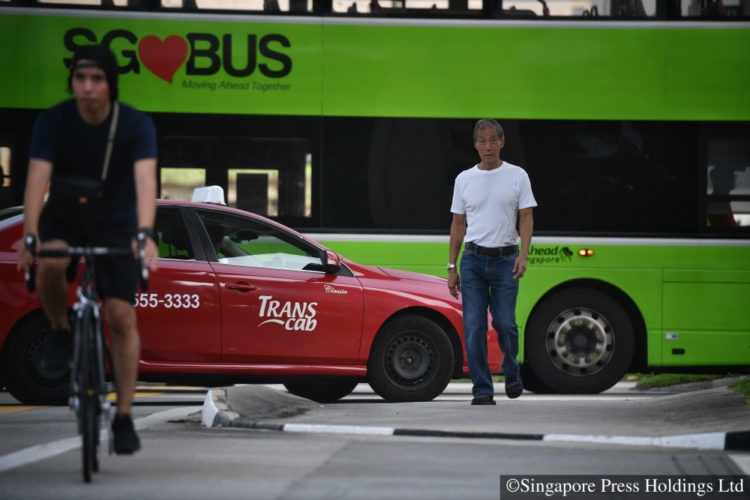 Mr Sunny Yeo crossing the junction in Punggol where his mother was hit by a car while he was pushing her across the road in a wheelchair in August. She died three weeks later. At the junction, vehicles in Punggol Central share the same green time as pedestrians on Punggol East Road.

Even as jaywalking-related accidents have risen, recent cases of cars knocking down pedestrians who had the right of way bring into question the safety of designated crossings.

And the Land Transport Authority (LTA) is taking steps to rectify this for at least one such crossing.

On July 28, a driver in a Mercedes-Benz knocked down a young woman who had the right of way at a crossing in North Buona Vista Road.

A dashboard camera video of the incident was shared on social media site SingaporeGo. The woman was seen flung to the tarmac, but she got up soon after. It is not known how badly she was hurt.

At this junction, vehicles in Punggol Central share the same green time as pedestrians on Punggol East Road, and drivers are expected to give way to pedestrians who are crossing. But a driver in a Toyota did not, collided with Madam Tan, and ran over Mr Yeo’s foot.

“My mother really suffered a lot,” Mr Yeo said. “If I had crossed just seconds later, my mum would still be alive now.”

The police said they are investigating the case, and Mr Yeo said he is also seeking legal counsel.

He said he feels that at such a big junction, vehicles must be made to stop when there are pedestrians crossing.

“I’m not sure how it can be done, but it should be done,” he added.

In response to queries from The Straits Times, the LTA said it will be painting turning pockets at the junction to remind motorists to pause and look out for pedestrians.

It added that it would work with the Traffic Police to see if other enhancements are required. It said that both motorists and pedestrians must do their part to ensure their own safety on the road.

This echoes an Appeals Court ruling last year. In a two-to-one decision, the court assigned 15 percent blame to a pedestrian who was injured in an accident even though the lights were in his favour.

Meanwhile, there are junctions where crossing pedestrians and turning vehicles do not share the same green time. The LTA said this was for junctions where motorists’ view is obstructed.

Observers said this difference may cause confusion.

Mr Bernard Tay, president of the Automobile Association of Singapore, said that it was best to “de-conflict the green time for turning vehicles and crossing pedestrians” at all junctions.

He said: “Overseas researchers have shown that pedestrians are better protected with the implementation of split-phase lights. Statistics have also shown that there is a larger decline in pedestrian incidents as well as multi-vehicle crashes when green time is not shared.”

But he added that “inconsistent application of the shared green time poses a safety problem only if the driver has poor situational awareness or drives without due care and consideration for other road users”.

“The safe driver would look out for pedestrians at every traffic junction, whether or not it has shared green time,” he noted.

Last week, the Traffic Police said there were 161 accidents involving jaywalkers in the first six months of this year, up from 133 in the same period last year and 109 for the corresponding period in 2015.

According to past statistics, 620 pedestrians were killed in road accidents between 2004 and last year.

This makes pedestrians the most vulnerable group after motorcyclists and their pillion riders, who chalked up 1139 deaths in the same 13-year period.