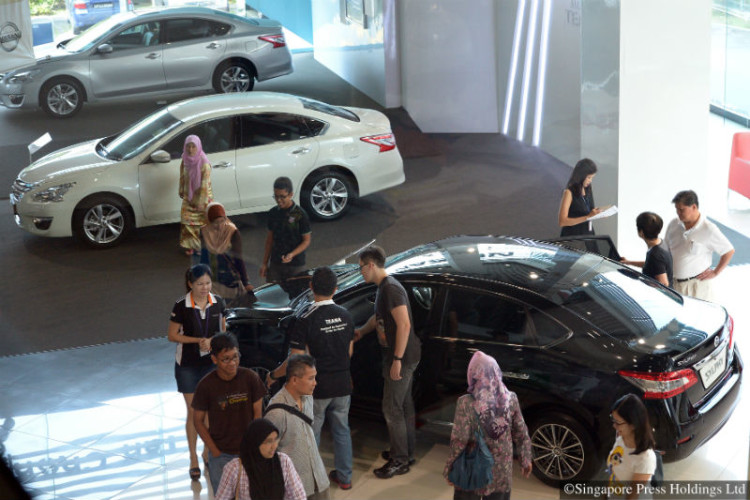 Separately, the loan tenure has been raised to seven years from five.

“Since then, demand conditions have moderated and it is timely to ease the measures.”

Industry observers were surprised by the news, which one said “came out of the blue”. But they were divided over the impact it might have.

Some motor traders said it might not make a big difference as many parties have long found ways to circumvent the loan curbs. One common way is to inflate the invoice of the car. Another is to offer leases instead of hire-purchase deals.

Of late, ride-hailing apps like Uber have also been offering big loans to potential car buyers. They do so by registering the cars under a company’s name, as private-hire vehicles, instead of the buyer’s name. This way, the MAS restrictions do not apply.

Mr Ron Lim, general manager of Nissan agent Tan Chong Motors, said: “The reality is that high financing is already in existence, either through parallel importers or Uber.

“So, immediately, there will probably be no change in demand.”

Mr Lim, however, welcomes the move because it “bridges the gap” for those who have been playing by the rules. “This helps to level the playing field.” he said.

He does not think this will lift COE prices. “As in all businesses, the car industry has been impacted by the weaker economy,” he said. Easing the curbs “won’t make people feel richer”.

But he said it might influence people to switch from Uber deals to more straightforward hire-purchase deals from authorised agents.

Nanyang Business School Adjunct Associate Professor Zafar Momin said: “By easing the curbs, the MAS is priming demand, which is good in the sense that more people can afford cars, but it will raise COE prices.”

He added that this could mean people ending up “buying cars at even higher prices”. “Also, I wonder what this means in terms of policy coherence for trying to make Singapore a ‘car-lite’ nation,” he said.