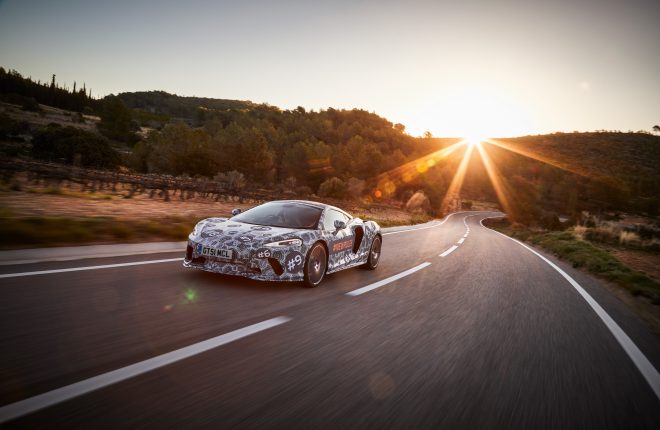 The new and unnamed grand tourer will “combine competition levels of performance from a twin-turbo V8 engine with continent-crossing capability and a level of agility never experienced before in the luxury Grand Tourer segment”, Mr Flewitt asserted.

He added that it will be “the most usable mid-engined car yet”.

Under wraps til May, the new McLaren grand tourer is part of the company’s Track25 business plan which details how McLaren will evolve between now and 2025.

Not much was revealed about the new model save for the fact that it’s currently undergoing “further validation tests”, including a 1600km drive from McLaren’s development base near Barcelona, Spain, back to the McLaren Technology Centre in Woking, England.

The test will be completed in one stint with two occupants and a full complement of luggage.

It is one of many long-distance drives to help McLaren confirm the new model is both comfortable and refined over long distances.

It will not be part of McLaren’s existing series of cars, instead it will be a “unique, tailored model”.

McLaren described the upcoming car’s interior as “spacious, uncluttered and modern”, hinting at a driver-focused cockpit.