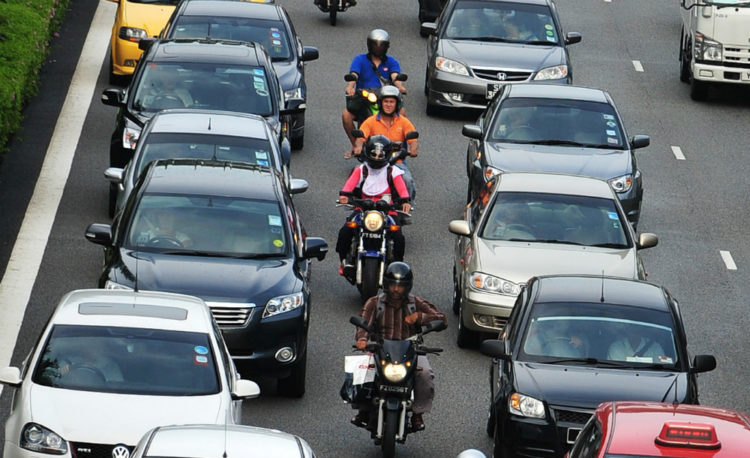 Motorcyclists weaving through heavy traffic on the Pan-Island Expressway (PIE) during the evening rush hour.

These figures can be reduced if motorcyclists equip themselves with protective gear and adopt safe riding habits, urged Ministry of Home Affairs parliamentary secretary Amrin Amin on Saturday (Aug 19).

Speaking at the launch of the Singapore Ride Safe 2017 at Singapore Expo, he said: “Every road fatality is one too many, and behind every fatality is a grieving family… As riders, we must do whatever we can to avoid accidents and protect ourselves.”

From January to June this year, there were 24 fatal accidents involving motorcyclists, down from 32 in the same period in 2016.

The number of traffic fatalities also went down by 7.6 percent to 61 in the first half of the year, from 66 in the same period last year.

Besides wearing helmets, motorcyclists and their pillion riders should also put on the appropriate riding jackets, gloves and boots, he added.

The Traffic Police and the Singapore Road Safety Council also announced their new “gear up, ride safe” safety campaign at the event.

They are the faces of this year’s campaign, held in conjunction with the Singapore Bike Show, and will feature on publicity banners and posters across Singapore.