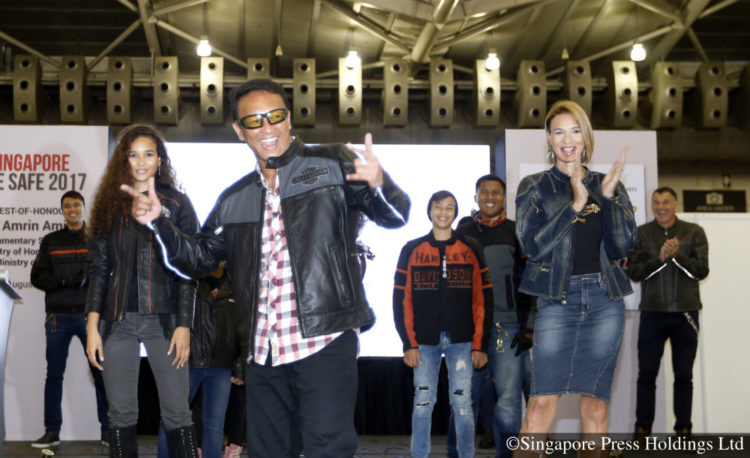 The roads were safer for motorcyclists in the first half of this year, with fewer of them involved in fatal accidents and suffering injuries.

From January to June, there were 24 fatal accidents involving motorcyclists, down from 32 in the same period last year, according to latest statistics revealed by the Traffic Police (TP) yesterday.

The number of motorcycle accidents that resulted in injuries also saw a decrease, with 2141 in the first half of the year, as compared with 2172 in the same period last year.

Speaking at the launch of Singapore Ride Safe (SRS) 2017, he said about one motorcyclist loses his life on Singapore roads every week, based on the half-year figure of 24. This number makes up close to 40 percent of the 61 traffic fatalities in the first half of this year, he added.

He cited an accident earlier this month, which saw a motorcyclist killed after a car flipped over the road divider and rammed into him.

The risk of these accidents can be reduced if riders equip themselves with protective gear and adopt safe riding habits, said Mr Amrin.

“Don’t just wear helmets; put on your riding jackets, gloves and boots. Doctors will tell you from the cases they have seen that protective gear makes a big difference.”

While there are no plans yet to make riding gear compulsory by law, Mr Amrin said on the sidelines of the event that it remains “something that we would like to encourage and promote extensively”.

The TP and the Singapore Road Safety Council, which has led the SRS for the past 11 years, also launched its new “gear up, ride safe” campaign message.

The footballers are the faces of this year’s campaign and will feature on publicity banners and posters on lamp posts and overhead bridges islandwide.