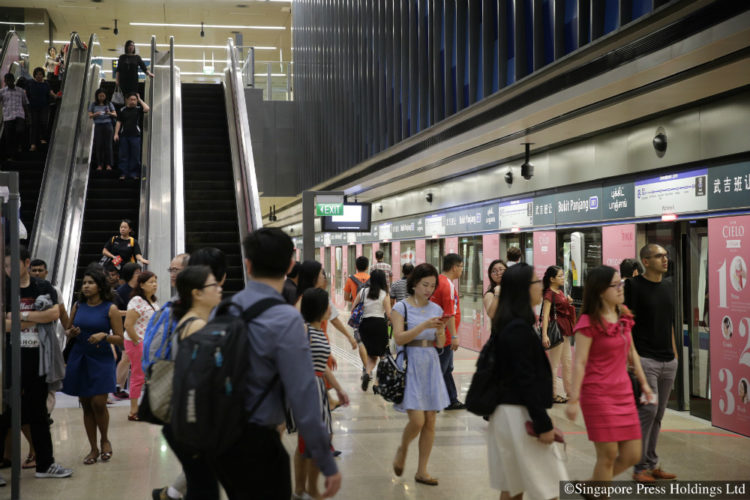 The trains seem to be getting more reliable, going by their performance in the first quarter of this year, though some lines are faring worse than others.

From January through March, trains on the MRT network collectively covered 354,000km between delays of more than five minutes, the Land Transport Authority (LTA) said yesterday.

This puts the system on track to meet its reliability targets. In March, Transport Minister Khaw Boon Wan had spelt these out as covering 300,000 train-km between delays of five minutes or more.

But it will require some serious catching up to perform as well as Hong Kong’s Mass Transit Railway, which hit more than 855,600 train-km between delays during the first quarter of this year.

Still, the MRT’s latest showing is a clear improvement from the first quarter of last year, when only 159,000 train-km were covered between delays of over five minutes.

LTA deputy chief executive for infrastructure and development Chua Chong Kheng stressed that the MRT’s achievement was just for the first three months of the year.

“We want to sustain this, and if possible, do even better,” he said.

The Downtown Line had the best performance, hitting 1,033,000 train-km between delays.

The worst-performing was the 30-year-old East-West Line, which clocked only 215,000 train-km between delays.

In the first three months of this year, there was only one service delay of more than 30 minutes for the entire MRT network – and this was on the East-West Line.

The figure did not, however, take into account incidents where trains continued to run, even if slowly, such as in the case of a signalling fault on the North-South Line in February that caused morning peak-hour commuters to face an extra 30 minutes of travel time.

The Bukit Panjang and Sengkang- Punggol LRT lines each had two delays of more than half an hour.

Mr Chua was optimistic that rail reliability targets could be achieved, despite delays on the Downtown Line earlier this month, found to be caused by water seepage damaging electronic components of a screen door at the Botanic Gardens station.

As most of Singapore’s rail lines are underground, water seepage is an issue that rail operators will have to “continue to deal with”, he said.

The LTA also announced that it will be conducting full-day trials of the new signalling system for the North-South Line on weekdays from next week, in addition to the full-day Sunday trials, which began on April 16.

Mr Chua said some teething problems had been identified and were being fixed.

Meanwhile, the LTA said the replacement of the third rail on the North-South and East-West lines is more than 95 percent complete. The third rail supplies power to trains.

Tenders have also been called to upgrade the power system on the North-South and East-West lines to include condition monitoring tools for better fault detection and identification. This could be awarded by early next year, though the project could take five years to complete.