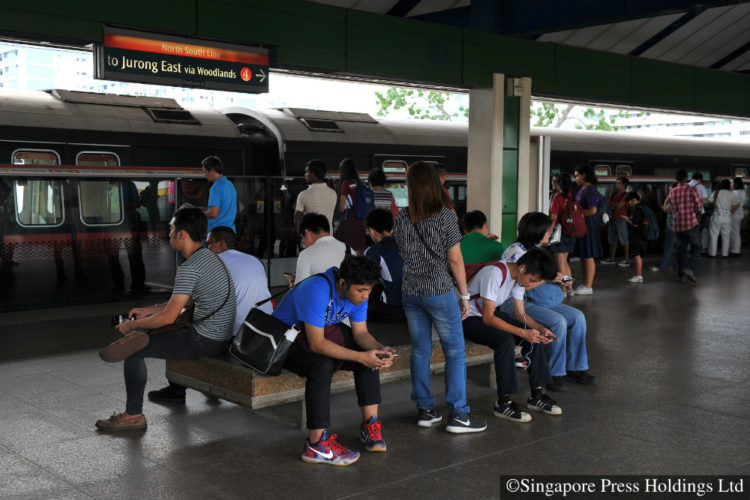 Commuters waiting for the train at Yishun MRT station on 12 August 2016.

Trains had to be slowed down on the North-South Line yesterday because of a track fault which could only be repaired after normal travel hours.

A rubber insulator had melted on the city-bound tracks of the MRT line early yesterday morning, creating a gap between the running rails, which the trains run on.

To ensure safety, transport operator SMRT said it had to run trains at lower speeds over a 150m stretch between Bishan and Ang Mo Kio stations.

This resulted in a bunching up of trains on the heavily used line during morning peak hours.

During the evening peak period, there was a delay of about one minute for city-bound trains setting off from Ang Mo Kio station. Trains were also slowed down when approaching the Bishan station from Ang Mo Kio.

These delays, however, did not appear to significantly affect travelling time, with trains continuing to arrive at intervals of about three to four minutes.

The Straits Times understands the melting was caused by electrical arcing, which is the result of a build-up of debris. Electrical arcing is also understood to have been the cause of a trackside fire between Marina Bay and Raffles Place stations on Oct 7.

Yesterday’s incident came a day after a delay on the East-West Line, which SMRT said was caused by a software glitch.

Free bus services were provided between Yishun and Toa Payoh during the delays yesterday morning.

On its Facebook page, SMRT apologised for the inconvenience, adding that commuters could consider taking the North-South Line towards Jurong East to transfer to the East-West Line.

The rail operator added that its engineers were “monitoring the situation closely”.

Last week, SMRT apologised for an unprecedented flooding of the North-South Line which disrupted services for 20 hours on Oct 7 and 8.

Mr Sitoh Yih Pin, chairman of the Government Parliamentary Committee for Transport and MP for Potong Pasir, said: “It is unfortunate that there have been train delays on the East-West Line and North-South Line in the past two days. It is understandable that commuters are frustrated.

“Our train operators must work hard to rectify any faults expediently and ensure that repeat incidents are mitigated. If there is a systemic issue to be addressed, it should be addressed.”

The faults yesterday and on Tuesday took place in the midst of the O-level examinations.

When contacted, the Singapore Examinations and Assessment Board said no students taking their exams were affected by yesterday’s delays.