Rail operators must inform passengers if delays are over 10 minutes | Torque
Loading posts... 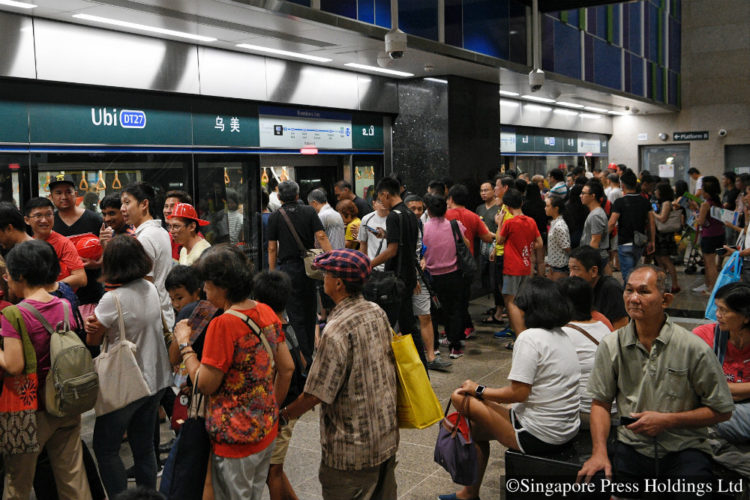 The regulator outlined the requirement following queries from The Straits Times regarding complaints from commuters that operators had either been tardy or did not make announcements during recent rail disruptions.

“We have received feedback from commuters on rail operators’ public announcements during service delays, and will be looking into this matter,” an LTA spokesman said.

The spokesman added that besides train and station announcements, operators are expected to provide information through other channels if delays worsen. These include mainstream media and social media like Twitter and Facebook.

Rail operator SMRT has taken flak on social media in recent months from commuters complaining that delays are not being announced.

This has led to the formation of online groups such as the The Alternate Transport Advisory & Singapore Magnificent Rescue Team (TATA SMRT) that allow people to share real-time updates on train disruptions and suggest alternative routes.

The most recent case was a train fault on the North-South Line during the morning rush hour on Nov 9. The Straits Times reported that commuters posted photos online of congested platforms at Admiralty, Ang Mo Kio, Woodlands and Yishun, complaining that there were no announcements of a delay.

SMRT said it is improving its travel app, SMRT-Connect, to give commuters more accurate information, especially during peak hours and service disruptions.

The information will include the number of trains that commuters may have to wait for before they can board. During delays, estimated train arrival timings will be calculated not just using “engineering down time”, but also taking into account the crowd levels at stations.

Mr Patrick Nathan, SMRT’s vice-president for corporate communications, said the firm is also piloting QR codes at stations to give commuters information on alternative bus options during a disruption.

“We recognise and understand the need to notify commuters of any incidents that may affect their travel experience,” Mr Nathan said, adding that SMRT will alert commuters of delays longer than 10 minutes through various channels, including social media and at stations.

Operators SMRT and SBS Transit have to adhere to a code of practice on incident management that was initiated by the LTA in 2012.

This came after SMRT’s dissemination of information to commuters during two massive breakdowns on the North-South Line in December 2011 was found to be lacking in timeliness and detail.

Communications experts said that as a public service provider, SMRT needs to be transparent and prompt in announcing delays.

But they also acknowledged the challenges.

Mr Lars Voedisch, managing director of PRecious Communications, told ST: “You could argue that they should share more information at earlier stages of possible delays.

“But at the same time they also shouldn’t overload the public with information that only has a minor impact.”

He added that if a company is already in trouble, it has to accept the fact that the job in communications “ isn’t to be loved, but to be hated less”.

“You can’t undo the immediate incident or impact it has. But you can help to mitigate it as much as possible,” he said.

For instance, SMRT’s initial announcements following the train collision at Joo Koon MRT station on Nov 15 “understated the severity of the incident”, said Dr Ang, who is from the school’s department of management and organisation.

While the collision which left 38 people injured happened at 8.20am, and SMRT had informed commuters of a disruption, it was not until 11am that the operator, together with LTA, issued a joint statement, saying that the trains “came into contact”.

National University of Singapore transport researcher Lee Der-Horng said commuters further down the line from a train fault may experience longer waiting times than what operators announce because disruptions result in congestions across the network that take time to ease.

Train operators thus need to find a way to customise their alerts to commuters at different stations, he suggested.