Rail reliability should focus on people and not just numbers | Torque
Loading posts...
0 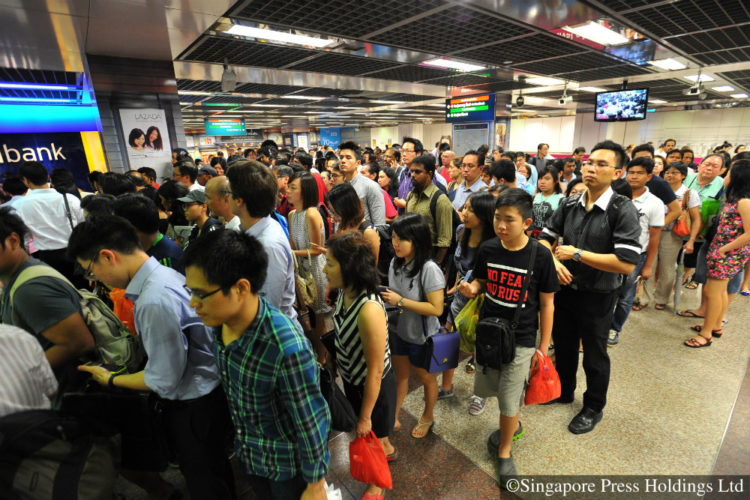 The crowd at City Hall MRT station during the disruption on 7 July 2015. A power trip, which could have been caused by a faulty train, crippled services throughout the North-South and East-West lines for more than two hours during the evening rush hour, affecting more than 250,000 commuters.

Commuters in Singapore will be among the first to agree that there is a disconnect between rail reliability statistics and what they experience on the ground.

Latest figures, for example, show that reliability has improved by three times since 2015.

So, what gives? Were the numbers wrong? Are commuters here just too intolerant? Or was it all the doing of the media, out to sensationalise breakdowns?

A closer look at the numbers themselves may yield some answers.

Singapore’s MRT lines in operation total around 170km. The North-South and East-West lines – the oldest here – make up just over half of the network.

But the two lines account for close to two-thirds of the daily MRT ridership of 3.1 million. This is because these lines serve the most built-up areas of the island. Their rolling stock consists of six-car trains, versus three-car trains in two out of the three other lines.

Alas, the two older lines are more prone to glitches too.

From 2015 to the first half of this year, they were responsible for 22 out of 37 major breakdowns (those exceeding 30 minutes). That is about 60 percent of major breakdowns.

Overall, they have proven to be not as reliable as the newer lines – and not solely because of their age. The statistics bear this out.

So essentially, you have two lines carrying the bulk of rail commuters here experiencing the most number of delays.

The other three lines – North-East, Circle and Downtown – account for less than 30 percent of rides. They also experience fewer faults (four out of 10 for those lasting more than 30 minutes).

In the first half of the year, the North-East line clocked 978,000 train-km between incidents, while the Circle and Downtown lines both clocked 518,000 train-km.

So in essence, you have far fewer people travelling on lines which together almost equal the length of the heavily used North-South and East-West lines.

It does not help that most breakdowns happen during peak hours. Out of the 15 disruptions reported by The Straits Times this year, 13 took place in the morning or evening peak.

During the day, the MRT is most packed between 6.30am and 9.15am, and then again between 5pm and 8pm. These peak hours cover less than one-third of operational hours, yet account for more than half of weekday ridership.

If commuters find it hard to believe the rail statistics, these would be some of the reasons.

The statistics are not lying, though. Because of the expanding network, because additional trains have been injected into the system, and because there is no distinction between three-car and six-car trains, the total number of train-km clocked in the system has grown in recent years.

Rail reliability numbers track the distance or train-km travelled before a breakdown happens, even if they do not capture the severity of each incident. The expansion of the rail network in recent years has expanded the denominator. And when the denominator is bigger, the resultant ratio looks rosier.

That is not to say Singapore’s MRT has not improved.

Glitches related to sleepers and third rails, for instance, have almost been eradicated, now that the two assets on the older lines have been renewed. If they had not been renewed, the higher system load from the additional trains would have led to more breakdowns, including major ones.

As other key assets such as trains, track and signalling – currently responsible for the majority of glitches – are renewed, commuters should have a better experience.

But this will take up to seven years. It is a long haul for folks who have been waiting for a smoother ride since 2011.

The operators can, however, do more to ease the pain in the meantime. Most of it lies in effective communication. Today, it is evident that commuters do not have sufficient information given in a timely manner for them to decide whether to wait out a delay or seek another travel option.

It is still not clear when their fares can be waived, and which buses are free. Even train station staff and bus drivers are sometimes clueless. A recent story of passengers having to guide drivers who were unfamiliar with a bus bridging route goes to show this.

Commuters are also frustrated with delays seemingly being underplayed. For instance, announcements say five minutes when, in reality, it is 15 minutes or more. Other times, there are no announcements at all, and commuters have had to figure things out themselves.

Incident alerts are also not always coordinated between the two rail operators, and commuters who could easily have avoided an affected line end up in one.

If the operators can fix this shortcoming, it will go a long way in helping the public cope with the unpleasantness of a breakdown.

And perhaps soften the perception that things are hopelessly broken – which they are not. An inordinate amount of money and effort has been poured into improving the system, and improvements are showing, even if not as dramatically as the rail performance statistics suggest.

Policymakers and operators should be mindful that even if rail reliability statistics have improved, more effort is needed to ease the pain of commuters who are not well represented by the statistics, such as those who rely on the North-South and East-West lines during peak hours.

Focus on people’s experience, not just numbers, in the drive for greater reliability.