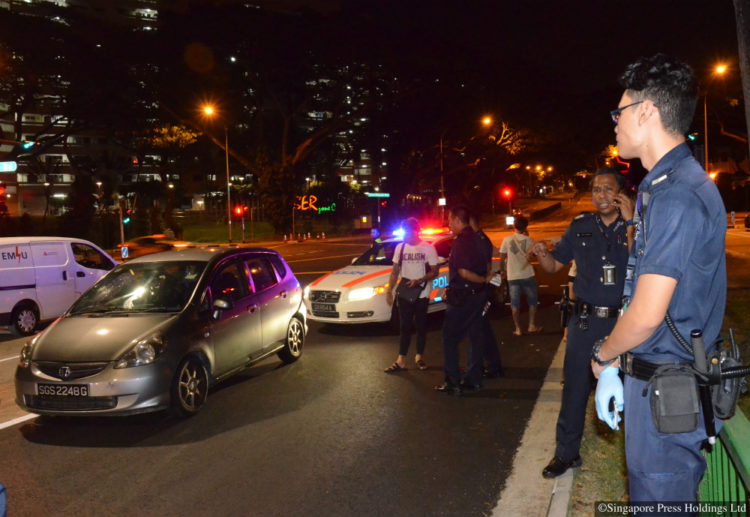 The scene of the incident at Telok Blangah Crescent on 13 January 2017. A bizarre car chase ended with the arrest of a driver and his passenger for drug offences; it turned out to be a rental car recovery operation gone wrong.

A bizarre car chase on Friday night that ended with the arrest of a driver and his passenger in Telok Blangah for drug offences turned out to be a rental car recovery operation gone wrong.

Earlier that day, four men with tattoos had walked into the basement of a Senett Estate building in MacPherson Road to rent a silver Honda Fit from Elitez Car Rental.

It shares space with Elitez Debt Recovery, since both companies are owned by Mr Elvin Ang, 32.

Two men stood at the door, while the other two discussed car rental plans with Mr Ang’s staff. Their behaviour and looks sparked the suspicions of Mr Ang, who told The Sunday Times about the incident.

“I’ve seen a lot of this type of people, they are probably drug users,” said Mr Ang, who hires former convicts for his businesses.

“But I had no reason to reject their business, so we rented the car to them.”

When they left, one of Mr Ang’s employees found on an industry-related website that one of the men had “a bad record” . Mr Ang and five of his employees decided they would tail the driver after work, he said.

Said Mr Ang: “I can track the car using a phone app and a GPS tracker that we installed in all our vehicles. The app has an ‘immobiliser’ function to stop the car remotely.”

That evening, at around 8.30pm, the company tracked the Honda to Safra Mount Faber. They lay in wait in two cars – four employees in a company car, and two, including Mr Ang, in his car.

When they finally spotted the Honda, they saw that the driver was not the person who was at their workplace earlier.

“This is a breach of our contract, so we began tailing them,” said Mr Ang.

The Honda and the company car stopped at a traffic light junction along Telok Blangah Crescent, with a police car right behind them. 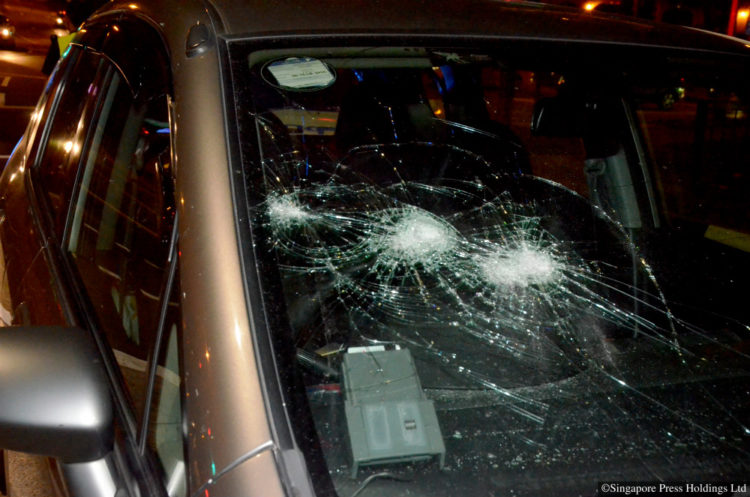 That was when the four employees, including Mr Augustine Tay, 20, got out of their vehicle and surrounded the Honda in a bid to recover it. Said Mr Ang: “We were all wearing our company T-shirts, so they knew who we were.”

But the Honda driver reversed, then accelerated and hit Mr Tay. Mr Tay fell onto the bonnet of the car, then rolled off, injuring his left leg.

It is believed that this took place in full view of the police officers behind them. Mr Ang then drove up and told the officers that he could immobilise the Honda with his phone.

The Honda stopped at the junction of Bukit Purmei Avenue and Lower Delta Road, and the police caught up with it. Eyewitnesses told Shin Min Daily News that the driver and a female passenger were not cooperative and locked themselves in, refusing to get out.

According to the report, the police had to break the windscreen.

The police said that an accident involving a car and a man occurred at 11pm on Friday along Telok Blangah Crescent.

“The 20-year-old male car driver and the 21-year-old female passenger were arrested for drug-related offences,” said a police spokesman.

Mr Ang said he saw bags of white powdery substance, drug paraphernalia and two knives – a fruit knife and a parang – in the Honda.

The Honda is now awaiting repairs at a workshop.

Mr Ang was upset that the police broke his car windscreen to make the arrest. “They weren’t going anywhere because I had immobilised the car,” he said.

The police are investigating the case.