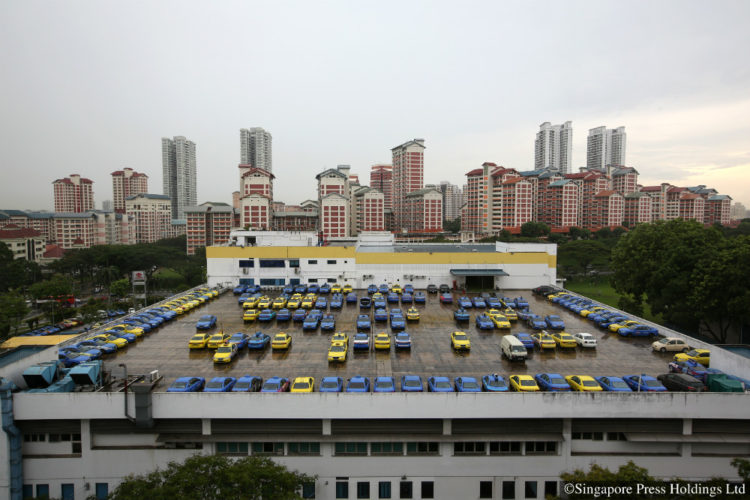 Taxis parked at the CityCab Building in Sin Ming Avenue.

Private-hire operators are plagued by a rising number of unhired cars even as the overall rental car population keeps hitting record highs month after month.

Checks by The Straits Times last month revealed that there were close to 1000 brand new cars – many wearing the Uber-owned Lion City Rental number plates – lying unused at a number of multi-storey carparks here.

This mirrors the situation faced by taxi companies, which are also saddled with well over 1000 idle cabs.

According to Land Transport Authority statistics, there are around 50,000 rental cars in Singapore – more than three times the rental car population before Uber and Grab entered the fray in 2013.

As many as 30,000 are attributable to private-hire companies such as Uber, Grab, EthozCab, Strides, Prime, Tribecar and Wolero.

The taxi population stands at around 27,500, 3 percent smaller than in 2013. While the dip is relatively minor, it is a contrast to decades of continuous growth.

Insiders said the large pool of unhired vehicles is a sign that the market has reached saturation point.

“The honeymoon period is over,” said the head of a rental fleet owner who declined to be named because he supplies cars to the main private-hire players.

“There are definitely not enough drivers to go around. And those who have been driving are finding out that it’s not that easy to make a living.”

Uber driver Jerry Yeo, 44, switched from a monthly rental car to an hourly arrangement with Smove recently because “the cost is lower”.

Mr Yeo has been driving with Uber for just over two years, but reckons he will not stay much longer. “The earnings are not attractive,” he noted. “There are no long-term prospects.”

Taxi driver Alan Tang, 54, said cabbies are also feeling the earnings crunch because of the heightened competition brought about by private-hire cars.

“We should do away with all the surcharges, which are killing taxi drivers,” Mr Tang said, noting that private-hire cars do not impose such surcharges. “Otherwise, there will be fewer and fewer taxis on the road in the future.”

Mr Tang added: “I was at the CityCab building last week and even the carpark ramps are filled with cabs. They’ve run out of space to park these idle taxis.”

Asked about its unhired rate, a ComfortDelGro spokesman said: “We do not divulge competitive information.”

Likewise, neither Uber nor Grab would comment on the number of idle cars they have.

“We don’t disclose that kind of information,” an Uber spokesman said. His Grab counterpart said: “We are experiencing a healthy demand for rental cars. Currently, there are more than 50,000 Grab drivers in Singapore.”

SIM University economist Walter Theseira said: “The regulators want to take advantage of the potential third-party apps’ offer to improve the taxi market, but they are very cautious about breaking the existing taxi pricing and operating model.”