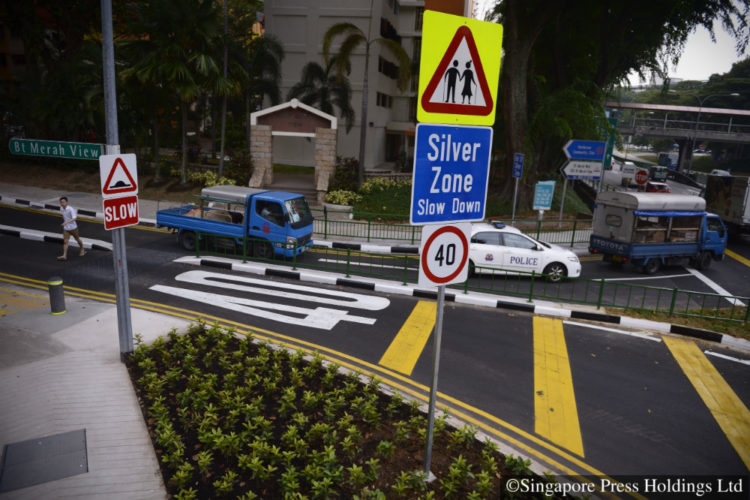 In 2014, the Land Transport Authority introduced silver zones, with features such as rumble strips, gentle curves and narrower lanes to help slow down motor vehicles.

The number of deaths on Singapore roads is set to hit a record low, with experts saying efforts to deter speeding have begun to bear fruit.

Police estimates show that there were 97 deaths here caused by road accidents from January to October, a 17 percent drop from the same period last year, when there were 117 fatalities. Injuries were down 10 percent.

Barring a sharp spike in the last two months of the year, the number of road fatalities is set to be the lowest recorded in the 37 years for which data is available. It marks the continuation of a downward trend since the 1980s, when between 200 and 350 people died on Singapore’s roads every year.

Road traffic experts trace the decline to three major efforts: campaigns that coax motorists to slow down and drive carefully, dialogues with road users to change their mindset, and the widespread use of cameras to deter speeding.

Mr Gerard Pereira, a business development manager at the Singapore Safety Driving Centre, believes the improved situation is largely due to the cameras. He said: “With so many cameras on the road, there are fewer people speeding, and that is important because speeding is one of the biggest causes of accidents.”

In May last year, the Traffic Police said it would deploy new speed laser cameras at 44 locations deemed to be high-risk areas, including roads such as Ang Mo Kio Avenue 1 and Nicoll Highway. The new cameras can capture images in low light and with higher resolution. They can also capture video.

The role of road safety campaigns is also important, said Mr Bernard Tay, chairman of the Singapore Road Safety Council, which aims to help prevent road accidents and promote safety. Mr Tay believes that as a result of this year’s Safer Roads campaign slogan, Choose Graciousness, “drivers and road users are more patient and tend to give way to one another to prevent accidents”.

To encourage a mindset change, the Traffic Police also introduced the “Use Your RoadSense” movement in 2015, which aims to use campaigns and dialogues to raise public awareness of road safety.

Mr Ang Hin Kee, deputy chairman of the Government Parliamentary Committee for Transport, however, believes that despite the falling number of road casualties, efforts must be kept up, especially those aimed at protecting the elderly.

“The Highway Code and driving schools need to incorporate elderly concerns plus the use of personal mobility devices, especially e-bikes and other cyclists on roads, into their curriculum,” he said.

In 2014, the Land Transport Authority introduced silver zones, with features such as rumble strips, gentle curves and narrower lanes to help slow down motor vehicles. There are now 15 silver zones in residential areas such as Tampines Street 11 and Woodlands Drive 14.