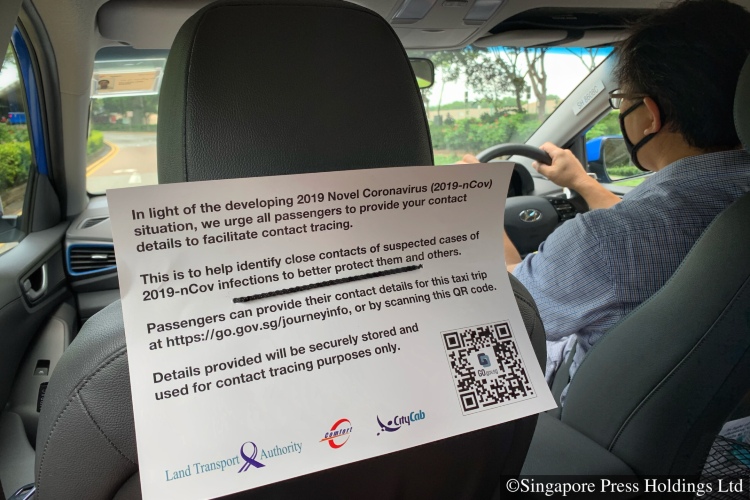 SafeEntry QR code in a taxi asking passengers to provide their contact details for the trip. All cabs will eventually have the QR codes, which are being rolled out across the industry from today.

Commuters are being urged to scan the SafeEntry QR code that will be appearing in taxis from today to help facilitate contact tracing in case they are at risk of having been infected with the coronavirus.

A Land Transport Authority (LTA) spokesman said that street-hail passengers “are strongly encouraged to be socially responsible and scan the SafeEntry QR codes at the point of boarding”.

All cabs will eventually have the QR codes, which are being rolled out across the industry by the LTA and taxi operators from today.

People who book rides via taxi apps or ride-hailing platforms need not scan the QR code as there is already other data available to help in contact tracing if needed.

Transcab general manager Jasmine Tan said the taxi firm – the third-largest player here – will work with the authorities to roll out SafeEntry progressively on all its vehicles.

ComfortDelGro declined to comment, while SMRT had not responded as of press time.

Taxi drivers could refuse to accept the trip if passengers do not scan the code, according to the Government’s GoBusiness site. The SafeEntry QR code replaces an earlier QR code in taxis also meant for contact tracing purposes.

Some cabbies and commuters told The Straits Times that while the concept is sound, challenges like getting people to scan the code remain.

“The first thing that comes to mind is to navigate to the location and not (to ask passengers to) scan the QR code,” said Transcab cabby Mr Toh, 67, who declined to give his full name.

“Of course, we can remind them, but it is still up to the passenger to do it themselves. We can’t enforce.”

There were also concerns that some elderly passengers who might not be tech-savvy could have problems operating their smartphones to scan the QR code, said ComfortDelGro cabby Salim Hashim.

“Some of them still own normal phones, not a smartphone,” he added.

Commuter L.Y. Tan, 30, who works in the hospitality industry, said: “Sometimes the driver is busy, with his eyes on the road, and he might not have time to coach the passenger on scanning the QR code.”

COVID-19: What drivers need in their cars now
What the latest circuit-breaker measures mean for car owners