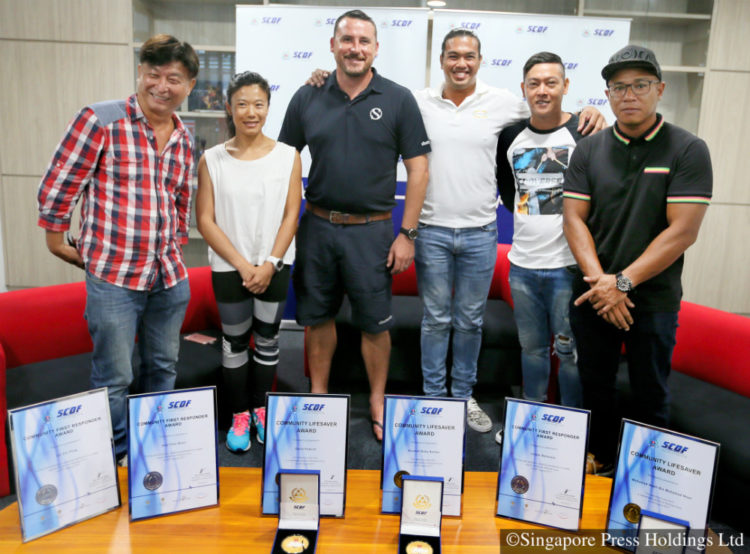 When he saw a man trapped in his car underwater at Sentosa Cove last Friday, Mr David Roberts dived in without hesitation.

The super-yacht captain, 36, had to break the car window with a stone to rescue the driver, after failing to pull him out through a small opening in one of the windows.

He was later joined by Mr Nicolich Boby Noman and Mr Mohammad Hasri Mohammad Yoor, who both dived into the water to search for more victims in the vehicle.

In recognition of their “gallant efforts”, the trio were presented with the Community Lifesaver Award by the Singapore Civil Defence Force (SCDF) yesterday.

Three others were also given the Community First Responder Award at the ceremony at Sentosa Fire Station for their “quick actions and initiative” when the man was brought to land.

Mr Ang Chee Boon brought a portable oxygen set and administered oxygen to the man. He was assisted by Ms Lei Zhi Ping, who also helped with the diving gear for Mr Noman and Mr Mohammad Hasri to enter the water.

Mr Leojan Banzuela, who witnessed the incident, helped by steering the safety boat near the incident area to ensure the divers’ safety.

Mr Ang, who runs a boat chartering company, said the rescue by Mr Roberts was not an easy one.

“Not many people can free-dive without weights and fins to 6m to 8m and do a rescue,” he said, referring to what Mr Roberts did.

The latter was a first-responder in South Africa, and a water-sports enthusiast.

“I swim a lot, I surf, I board. I’ve been involved in lifesaving and life-saving operations, that sort of thing my whole life, so yes, my background definitely helped in that situation,” said Mr Roberts.

When asked to describe the whole incident, he said: “It’s unreal. It’s not something you would expect on a Friday afternoon down in One°15 Marina on Sentosa island. It’s not what goes on.”

The man who allegedly drove the car into the sea at Sentosa Cove, Lim Jin Ping, 36, was charged in court last Saturday with committing a rash act.

He drove into the water while he was being pursued by two Sentosa rangers on motorcycles. 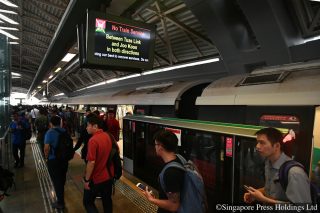 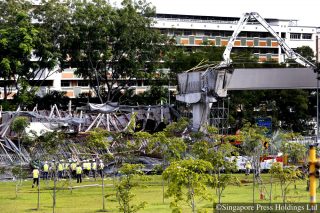