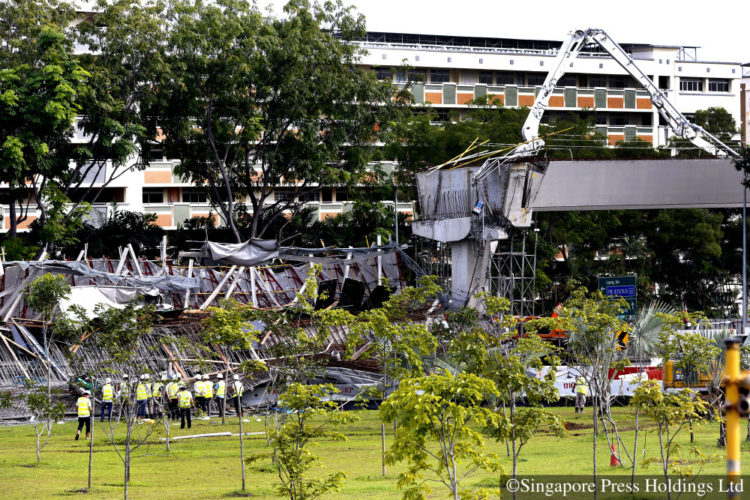 Ongoing excavation work for a temporary bypass road for traffic heading towards PIE (Changi Airport) from Upper Changi Road East on 15 July 2017, next to the section of viaduct undergoing construction which collapsed the day before.

Six months after a road viaduct collapsed in Upper Changi Road East, investigations into the accident which killed one worker and injured 10 others have not been completed.

“After investigations are completed, the matter will be referred to the Attorney-General’s Chambers for their assessment. More information will be provided at the appropriate juncture,” he said in response to Workers’ Party Non-Constituency MP Dennis Tan, who asked for an update.

Last August, Senior Minister of State for Transport Lam Pin Min told the House that investigations into the July 14 tragedy would be wrapped up by October. It is not known what is causing the delay, or when the probe will be completed.

In August, Dr Lam revealed that a price-quality ratio of 70:30 was used to assess bids for the ill-fated viaduct project. In the quality component, the Land Transport Authority assigned 25 percent to safety.

He noted OKP “actually scored the lowest for quality in the project submission”, although it had the highest price-quality score overall.

Post-incident checks revealed cracks at 11 other locations along the viaduct. It has also emerged that a consultant from CPG – OKP’s sub-contractor – who designed the viaduct was also the supervisor who checked the construction works.

While the practice is not illegal, industry players said it is not ideal.

The viaduct, linking Tampines Expressway to the Pan-Island Expressway and Upper Changi Road East, was slated to be completed by the first quarter of 2020.

Work has halted since the collapse, and will not resume until investigations are over.

The Manpower Ministry issued 66 stop-work orders in the first 11 months of last year. Most have since been lifted.

Two weeks after the collapse, Manpower Minister Lim Swee Say called it a “wake-up call” and said it would not have happened “if everyone involved in this project had paid enough attention to the design and construction of the viaduct and the safety of workers”.

The collapse was among the worst infrastructural failures here in recent years.

In April 2004, a section of Circle MRT Line which was under construction gave way, bringing along with it part of the Nicoll Highway nearby. Four workers were killed.