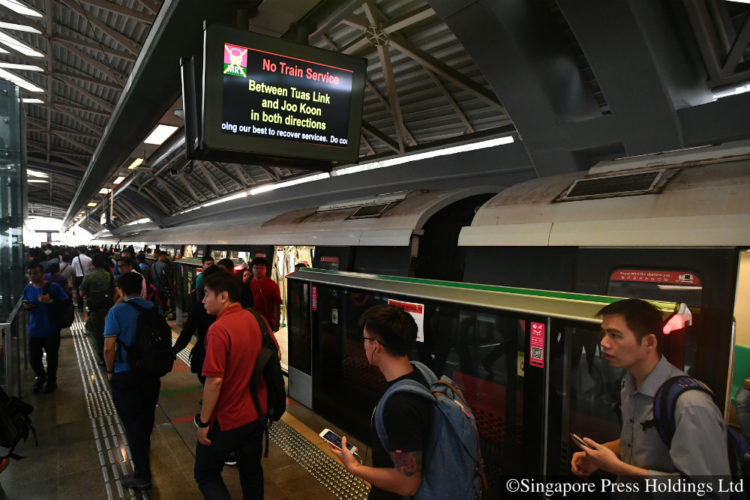 The rush-hour crowd at around 7.30am at Joo Koon MRT station, which was more packed than usual as train service between Joo Koon and Tuas Link stations was suspended on November 16, 2017.

The driver of an MRT train which ran into a stationary train at Joo Koon station on Nov 15 could not have reacted in time to apply the emergency brakes.

Transport Minister Khaw Boon Wan told Parliament yesterday that this was because the line’s operating control centre did not expect the train’s second protective “bubble” – which ensures a safe distance between trains – could be disabled.

The first protective bubble had collapsed earlier, and it was moving with the second bubble in place.

Mr Khaw illustrated this with an anecdote of a fatal accident involving a personal mobility device.

He said a friend, who was a corporate lawyer, called him “frantically” one day to tell him that he had knocked down an e-scooter rider at a pedestrian crossing. The rider later died in hospital.

Mr Khaw said his friend did not see anyone at the crossing at the time, and had slowed down but did not stop. But “the next second, he saw somebody on an e-scooter flung onto his windscreen”.

The minster said this was the same situation which the train driver faced.

“At that moment, are you able to respond in time? Thirty-six metres, yes, is not a short distance but the speed was 18km/h,” he said, referring to the distance between the two trains and the speed of the second one when it collided with the stationary one.

In his explanation, Mr Khaw noted that the driver also had to switch to manual mode before he could apply emergency brakes. “Based on logs and reviews, the train driver could not react in time.”

Mr Khaw said: “I’m not perfectly sure, but I’ll check.”

He later told the House that emergency brakes can be applied even when trains are in automatic mode.

Mr Khaw pointed out that having the Tuas West Extension running on a new signalling system while the rest of the East-West Line was operating on the old system contributed to the problem.

The two lines have since been truncated between Joo Koon and Gul Circle. Commuters have to alight at either stop and take a free shuttle bus to the other in order to continue their journey.

Mr Khaw said this arrangement will continue till the middle of the year, when the entire East-West Line has converted to the new signalling system.

Sections of the line will have shorter operating hours on Fridays and Saturdays, and no service on Sundays, to speed up the signalling upgrade.