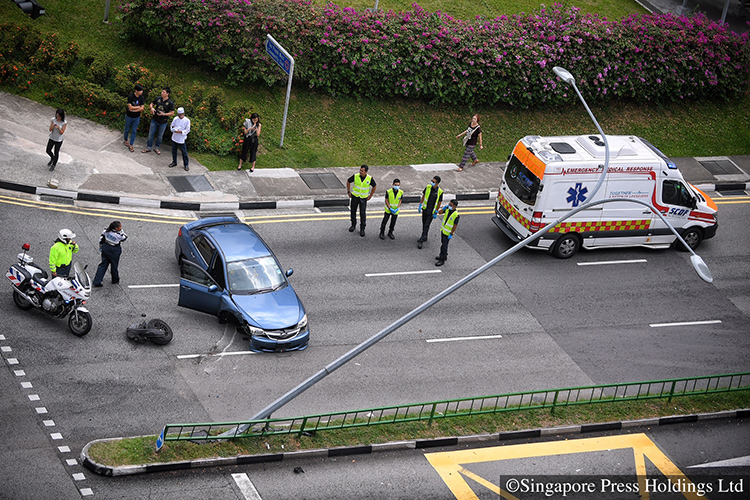 An aerial view of the accident scene in Lorong 1 Toa Payoh. A 66-year-old man sneezed while driving and lost control of his car on 19 April 2018. The car crashed into a road divider and the impact dislodged a lamp post, causing it to nearly topple over. His blue Subaru Impreza was badly damaged, but he was unhurt. No other cars were involved.

The association said there had been a “significantly higher increase” of 11.8 percent in incurred motor insurance claims, totalling $291.3 million for the interim period, despite a dip of 4.3 percent in the number of reported motor accidents.

As a result, the motor insurance sector incurred an underwriting loss of $12.6 million for the six months up to June 30, from a profit of $17.2 million in the same period last year.

The association noted that this was the third consecutive quarter in which the motor sector – which accounts for more than a quarter of the general insurance business – had been loss-making.

On the back of that, gross premiums for motor insurance shrank by 2.4 percent to $600.9 million in the first half of this year.

There are no details on what contributed to the situation, but the GIA said an inference could be made about the figures.

It said escalating claims on the back of fewer accidents could mean only one thing: The accidents were on average more severe, possibly involving more serious injuries.

The Straits Times understands that more claimants engaging lawyers could be a secondary contributing factor, as claims through legal means were usually bigger.

An increased number of inflated and fraudulent claims could be another contributing factor, sources said.

A bigger pool of private-hire cars – a fairly new phenomenon – had been cited as well.

Earlier this year, statistics from motor insurers showed that private-hire cars – which make up 4.9 percent of the total vehicle population – accounted for 9.4 percent of 82,800 accidents reported in the second half of last year.

On the whole, the general insurance industry saw a marginal 1.1 percent increase in total gross premiums to $2.07 billion in the first half of this year, GIA said.

Underwriting profit plunged by 94.5 percent to $3.14 million “as claims costs increased significantly across key segments such as motor insurance and work injury compensation insurance”, it said.

Work injury compensation posted an underwriting loss of $6 million – down from a profit of $1.4 million in the first half of 2017.

GIA president Karl Hamann said: “Our top priorities include working with key stakeholders to reduce the severity and frequency of motor accidents, and leveraging digital technologies… to lower and mitigate claims-costs inflation.”

Is packaging cars with insurance legal?