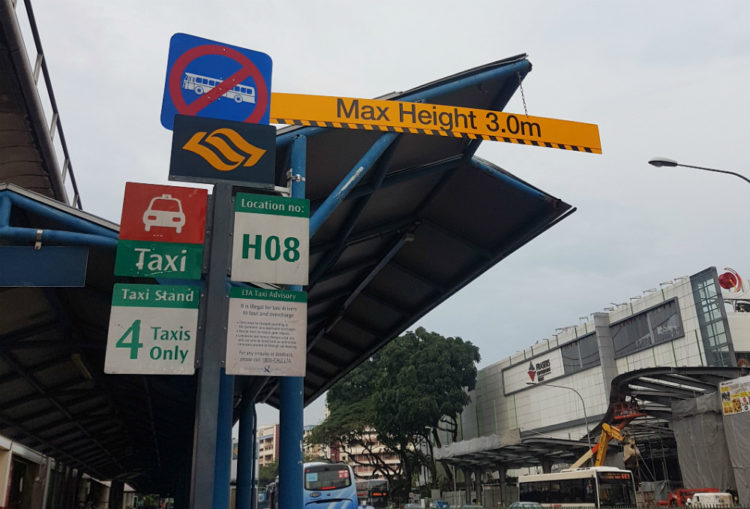 Enhanced signage at a sheltered taxi stand outside the Yishun MRT station, along Yishun Avenue 2, aimed at alerting bus drivers not to enter.

The most recent accident happened on Oct 28 when a double-decker SBS Transit bus had its top windshield shattered after the bus crashed into the shelter.

Earlier incidents took place in February and July this year when two separate Tower Transit double-decker buses crashed into the same taxi stand, located at the HarbourFront MRT station, across from the VivoCity shopping mall.

Since 2012, sheltered pick-up and drop-off points – including taxi stands – have been required to have a minimum headroom of 4.5m to provide sufficient clearance for double-decker buses, which are about 4.4m high.

These points are also fitted with height-limit signs and bars to alert drivers.

These include introducing no-entry signs for buses as well as changing the height-limit signage to a more prominent yellow, from the previous blue, and making taxi-lot markings more prominent.

“The operators have also reminded their bus captains to look out for the height-limit signs, as part of training of new bus captains,” added an LTA spokesman.

There were two other reports of similar incidents at other sheltered taxi stands this year.

In April, an SBS Transit double-decker bus was severely damaged after running into the roof of a taxi stand shelter at Bishan MRT station.

A month later, a double-decker bus operated by Go-Ahead Singapore crashed into the shelter of a taxi stand outside the Yishun MRT station.

No injuries were reported in any of the accidents.

The LTA said the enhanced signages are being progressively introduced at “selected sheltered taxi stands”.

Checks by The Straits Times found the changes have already been made at the affected taxi stands along Telok Blangah Road as well as at Yishun MRT station.