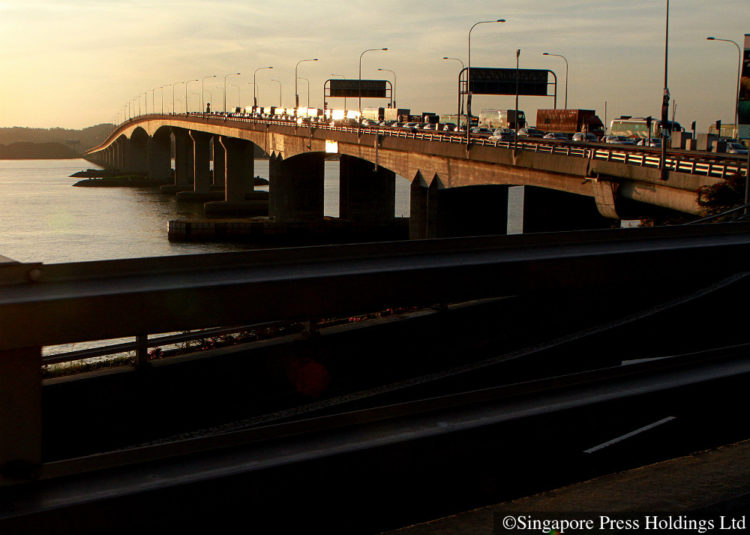 A view of the Second Link at Tuas from the Singapore side.

The high-speed rail (HSR) line between Singapore and Malaysia has an ambitious 10-year deadline to get the system up and running by Dec 31, 2026. But experts told The Straits Times yesterday it was achievable as long as construction starts by 2021, at the latest.

What is tougher, they said, is drafting the tender documents and contracts before 2021. And even more challenging is finalising the alignment of the 350km route, much of which is in Malaysia, they added.

Professor Lee Der Horng, a transport researcher at the National University of Singapore, said drafting the tender documents for a rail system like the HSR would be time- consuming as the project is new to both governments.

“Once the tender is awarded, the actual system construction can be done very quickly,” he said.

He foresees the construction taking around three years. Another one to two years would be spent on testing the line and ironing out any bugs and kinks, he said.

The HSR agreement, signed by both governments in Putrajaya on Tuesday, would cut travel time between Singapore and Kuala Lumpur to 90 minutes, compared with four hours by car. It has been called a “marquee project” by Prime Minister Lee Hsien Loong, who witnessed the signing with his Malaysian counterpart Najib Razak.

The ball will start rolling early next year when both countries award a tender jointly for a development partner to give operational, technical and procurement advice.

Another tender will be called in the fourth quarter of next year for a company to design, build, finance and maintain rail assets and trains.

Prof Lee, explaining why the construction would be relatively faster, said the HSR was unlike similar systems in Japan and Taiwan, where they had to be engineered to withstand natural disasters like earthquakes or typhoons.

So, in terms of engineering complexity, “the HSR will be relatively simple”, he said. In turn, the engineering design and construction will be simpler as well, he added.

Finalising the line’s alignment in Malaysia will be the biggest challenge, the experts said.

SIM University economist Walter Theseira noted the alignment in Malaysia has not been finalised yet.

“We don’t know much about any potential risks, for example, from environmental concerns, land acquisitions and so on,” he said.

If the issues create strong opposition to the project in Malaysia, it could delay the HSR, he added.

SIM University senior lecturer Park Byung Joon said if minor construction works do not begin in two years, it could be a sign the “planning process is not going too smoothly”. But if plans and designs for the lines are finalised quickly, the HSR could be built in as little as two years. “The 10-year schedule is ambitious but achievable,” he said.

About 335km of the HSR line will be in Malaysia, with the remaining 15km in Singapore.

The line will be linked across the Johor Strait by a 25m-high bridge near the Second Link.

Another bridge near the Causeway will be built for a separate Rapid Transit System (RTS), which will connect the Thomson-East Coast MRT line (TEL) to Johor Baru.

Political observers said the HSR and RTS projects reflect the extent to which Singapore-Malaysia ties have overcome their rocky past.

The 1990 Points of Agreement to move Malayan Railway’s station from Tanjong Pagar to Woodlands, for example, was held up for 20 years until a landmark swop deal between Mr Lee and Datuk Seri Najib broke the impasse in 2010.

Dr Norshahril said: “Singapore- Malaysia relations today are not about rivalry, enmity and hostility, but more on cooperation and mutual benefit.”

Added Singapore Management University law don Eugene Tan, a former Nominated MP: “Both governments have to ensure the political will on both sides is durable so that even with leadership changes, the tight deadline will be met.”