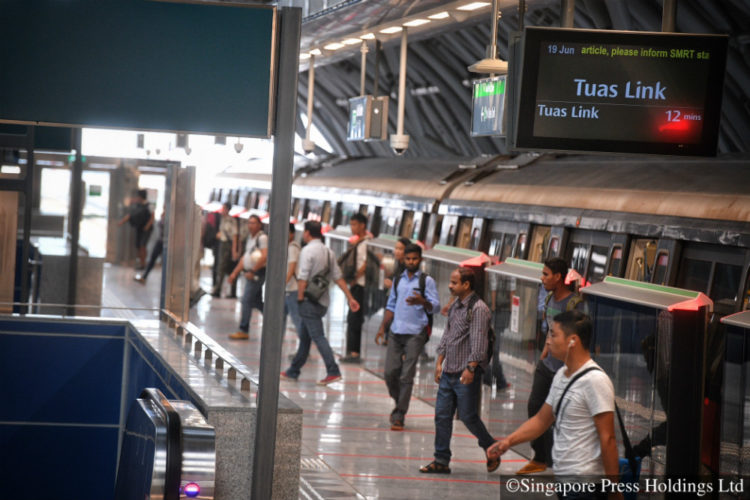 Commuters are relying on alternative modes of transport to get to work in the western end of Singapore, following the suspension of train services between Joo Koon and Tuas Link MRT stations.

Services have been suspended as the authorities continue investigations into Wednesday’s (Nov 15) SMRT train collision at Joo Koon, which left 36 people injured.

While free buses to take commuters from Joo Koon to stations in the Tuas industrial area are available, many told The Straits Times on Friday that their companies have made alternative arrangements.

Engineer Tsai Yu Ta, 36, said his company van would be picking up him and his colleagues from Joo Koon instead of Tuas Link, to go to their work site near Tuas Link.

He said the managers of his company are “quite understanding”.

“They have also pushed our starting hours half an hour back in case there are any delays, which is good news for us,” he said in Mandarin.

While the four stations on the extension – Gul Circle, Tuas Crescent, Tuas West Road and Tuas Link – will reopen after the weekend, the authorities will keep the service between Joo Koon and Gul Circle stations suspended for up to a month, with buses to bridge the gap.

Those who have to break up their journey by taking a bus between Joo Koon and Gul Circle will not be charged for a separate trip when they rejoin the train network.

At Joo Koon station on Friday, commuters told ST that they have made their own travel arrangements.

Said site engineer Ye Yant, 27, who was waiting for a sub-contractors’ lorry at Joo Koon station instead of Tuas Crescent: “It is troublesome, but luckily the arrangement we have is flexible and the lorry can drive further out to get us.”

A sales engineer, 27, who wanted to be known only as Cherria, usually walks to work from Tuas Link. “Fortunately my boss said he could pick me from Joo Koon today. I’m not sure how my other colleagues are getting to work.”

Accountant Koh Ling Ling’s company has arranged to have the company lorry pick them up from Joo Koon instead of Tuas West station. The company is located in Tuas South.

Ms Koh, 30, had some concerns about the suspension. “If the situation is just one or two days, it’s understandable. But one month is very long,” she said.