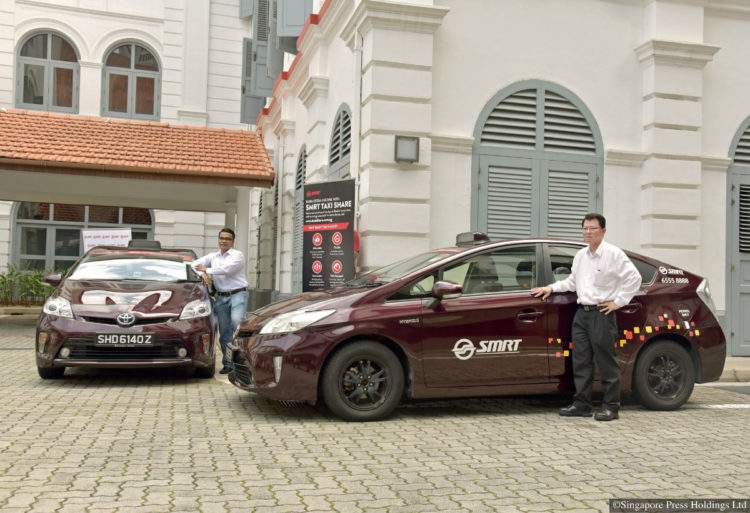 SMRT cabbies Muhammad Nur Dzhorif (left), 32, and Tay Seng Kok, 58, are considering signing up for the Taxi Share scheme so they can enjoy more work flexibility. The scheme, which will allow cabbies to rent taxis at an hourly rate of between $5.80 and $12.80, will kick off next month.

SMRT unveiled a new taxi-sharing scheme yesterday, as it seeks to rent out its unhired cars and offer cabbies more flexibility.

It is the latest in a string of initiatives being dangled by taxi operators to attract drivers, as the industry faces competition from private- hire services.

Under SMRT’s Taxi Share scheme, which will kick off next month, cabbies can rent taxis at an hourly rate of between $5.80 and $12.80, with a minimum rental period of three hours. For the first month, the promotional rental rate will start from as low as $3.80.

Hourly rental is a departure from the industry norm, in which cabbies pay rental daily, and are typically tied to contracts of between six months and a year.

Cabbies who register for SMRT’s new scheme can go online to book a taxi. SMRT said it will start with eight pick-up and drop-off points in the northern and central parts of the island, with plans to expand this to 20. Cabbies unlock the cars using a mobile app. SMRT will maintain and service these taxis.

Mr Tony Heng, managing director of SMRT Taxis and Private Hire Services, said there are about 100,000 taxi driver vocational licence holders, and estimates that about 50 percent of them are inactive. SMRT’s new scheme will allow it to tap this pool of drivers who may want more flexibility, he said.

SMRT currently has about 5 percent, or 175 cabs – out of its total fleet of 3500 – which are not hired out. It plans to use these cars for the shared scheme, and may scale this up depending on demand.

Mr Heng said SMRT will work with the Land Transport Authority (LTA) to possibly review taxi availability standards for the shared cabs. LTA requires a cab operator to have the bulk of its fleet on the roads during the peak hours, failing which it can be fined.

LTA said it “has received SMRT’s request for exemption from the taxi availability framework and is assessing the request”.

SMRT is the latest cab operator to adopt new measures to attract drivers. Many cabbies have quit or joined Uber and Grab.

In the first 11 months of last year, the average rate of taxis that were unhired in the industry was 5.9 percent, translating to around 1620 out of 27,500 cabs lying idle.

TransCab and Premier, which have fleets of 4500 and 1900 taxis, respectively, have slashed rentals. ComfortDelGro, the biggest firm with 16,700 cabs, has also launched a pay-as-you-drive scheme, in which cabbies pay rentals according to their mileage, said a report in Lianhe Zaobao.

ComfortDelGro’s group corporate communications officer Tammy Tan said: “In a competitive environment, it is not unusual for companies to introduce schemes and promotions. We have and continue to do so, not just for our drivers, but their customers too.”

SIM University economist Walter Theseira said of SMRT’s new scheme: “This is an excellent example of how the taxi industry is finally changing its business model in response to the competition.

“SMRT believes that having the vehicle (rented) out for a few hours a day is better than having it idle.”