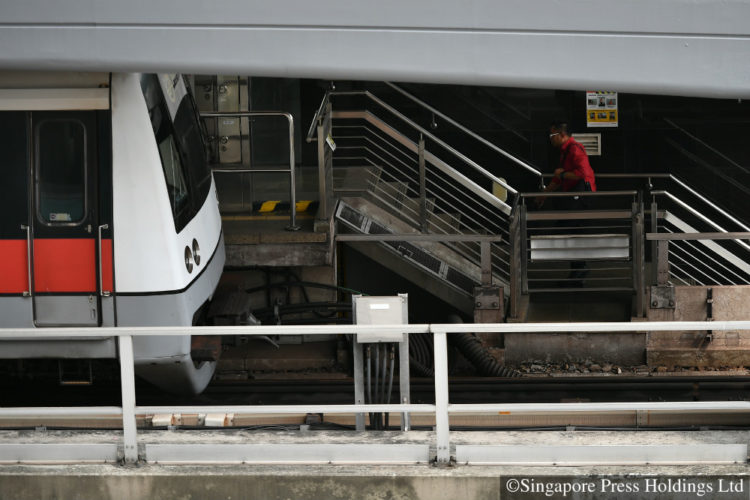 With a de-listing that relieved the company of shareholder pressure, and the Government buying over its operating assets last year, SMRT was poised to ride into this year in good shape.

The first major renewal effort for the North-South and East-West lines – to replace track sleepers – had been completed by the end of last year, a power-rail replacement project would finish by August, and the North-South Line would transit to a new signalling system promising shorter train intervals.

Then, SMRT appeared to have a lot going for it. But the rail operator seemed to have gone into a downward spiral this year as it was hit by several high-profile and shocking incidents, including flooding in an MRT tunnel and a train collision. And even a lightning strike.

Even as rail reliability – measured by the distance trains travelled on average before encountering a delay – showed improvements this year, commuters’ frustrations with SMRT continued to mount.

Faults arising from the signalling system tests, which were not captured in reliability data, were the source of frequent delays between May and September. Commuters also complained that public broadcasts on delays were not timely.

FLOODED MRT TUNNELS
Track, train and power faults have often been the culprits behind MRT disruptions.

But on the afternoon of Oct 7, it was a poorly maintained anti-flooding system that shut down a large segment of the North-South Line for 141/2 hours till the next day, affecting 231,000 commuters.

Neither the authorities nor SMRT could foresee the shocking scene of a train stuck in water on electrified tracks. That day, a torrential downpour resulted in rainwater up to 1m deep flooding the tunnels between Bishan and Braddell stations.

It took an overnight effort involving teams from the Singapore Civil Defence Force, PUB, the Land Transport Authority (LTA) and SMRT to pump out the water.

While unprecedented, the incident was entirely preventable, the LTA said in its investigation report released earlier this month.

The flood prevention measures – a storm water sump pit to collect rainwater and pumps to discharge it into the drains – were more than adequate and had a huge buffer. But a lack of maintenance, audits, and managerial supervision led to the water pit being likely close to full when the downpour happened that day, making flooding inevitable.

SMRT found that staff had falsified maintenance records over a seven-month period, signing off on work that was not done.

In the aftermath, SMRT sacked eight employees, demoted one, and took disciplinary action against two more. It also said it reserved a right to take legal action against two staff members who quit shortly after the flooding incident.