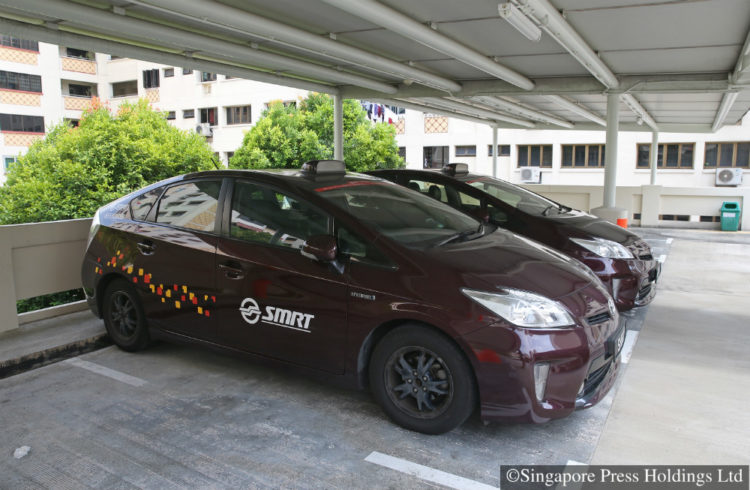 Rolled out in February with 16 cabs, SMRT’s Taxi Share scheme now has some 460 vehicles, accounting for about 13 percent of its total fleet of 3330.

Facing stiff competition from private-hire cars, some taxi drivers are opting out of hiring taxis full-time, which comes with the burden of high daily rental costs.

Rolled out in February with 16 cabs, SMRT’s Taxi Share scheme now has some 460 vehicles, accounting for about 13 percent of its total fleet of 3330.

To date, some 3000 cabbies have signed up with the programme, which allows them to book and rent a taxi for a minimum of three hours, at rates of between $5.80 and $12.80 an hour.

SMRT is the only operator offering such a scheme. Taxi drivers renting from other companies have to sign contracts ranging from six months to a year, and pay rental charges of up to $120 daily for a new saloon model.

Mr Tony Heng, SMRT’s managing director for taxis and private-hire services, said the plan was to progressively grow the number of vehicles in the taxi share scheme to 500 by the end of this year, but he is already close to reaching the target.

He said SMRT expanded the scheme because of the “encouraging” numbers of drivers signing up .

More than half drive regularly, and rent the taxis for six or seven hours each time. About 70 percent of the shared taxis are utilised daily.

In a challenging environment where cab operators are finding it harder to get full-time hirers for taxis, a flexible rental option is the way forward, as SMRT can tap a bigger pool of drivers to utilise cabs, said Mr Heng. These vehicles would otherwise sit idle in the yard.

Over the first five months of the year, the proportion of unused taxis in the country’s entire fleet was an average of 9.1 percent, compared with an average of 5 percent in the same period last year.

“It is a deliberate effort that we are pumping vehicles into (the) Taxi Share (scheme), in reaction to the overall market changes,” he said.

From a business standpoint, Mr Heng said the Taxi Share scheme is breaking even, but whether part- time rentals can ultimately rival full-time rentals in profitability remains to be seen.

Mr William Sai, 48, a cabby of 18 years, has been on the scheme since April. He usually rents a taxi from 7am to noon, and can make about $50 in profit after deducting rental and petrol. “With the competition from Uber, it is about sourcing which hours are the best to earn and yet have low rental rates,” he said.