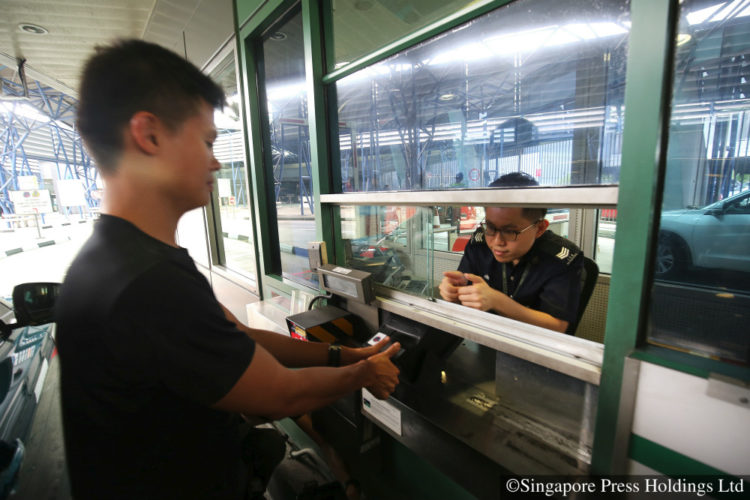 A traveller having his thumbprints scanned at the Woodlands checkpoint. ICA officers will be present to help people use the BioScreen machines.

Car drivers and passengers arriving and departing via the Tuas and Woodlands checkpoints have to step out of their vehicles and have both their thumbprints scanned at immigration counters.

The new move, introduced yesterday, is part of a trial to progressively expand the BioScreen security system to motorists, said the Immigration and Checkpoints Authority (ICA).

The security system, launched in April last year, is already in use in clearance zones at land checkpoints, such as those for train and bus travellers, as well as lorries and vehicles transporting goods.

The scanning of the thumbprints at immigration has to be done by everyone in a car, starting from age six. ICA officers will be present at the BioScreen machines to help people use them.

Assistant Commissioner Chua Sze How, commander at Woodlands Command, said the trial is being implemented progressively. This will give people time to become familiar with the new process, said the ICA.

He added: “The security of the country is of utmost importance to us. However, we will calibrate and adjust our implementation according to prevailing security assessments, and we will monitor the ground situation closely.”

Some people had raised concerns online that the system might prove challenging for elderly and disabled passengers. Responding, AC Chua said: “For travellers who require special assistance, our officers will assess each situation and render assistance accordingly.”

The Straits Times understands that the authorities hope to eventually roll out an automated car clearance system for Singaporeans, permanent residents and long-term pass holders that does not require them to step out of their cars.

Property agent Mohammad Burhan, 38, who travels to Johor by car once or twice a week for work, is concerned the new measure may cause more jams at the checkpoints.

Singapore’s land checkpoints are among the busiest in the world, with more than 400,000 crossings daily.

The ICA said in a statement: “With the implementation of BioScreen at car counters, travellers may experience slightly longer immigration clearance time.”

In seeking people’s cooperation, the ICA said security at checkpoints is a top priority, and the BioScreen system plays an important role in enabling it to verify travellers’ identities more robustly.

Transport researcher Park Byung Joon of the Singapore University of Social Sciences said there may be some inconvenience for travellers in the beginning, but in the long run, such security features could help save manpower and allow more traffic to be handled at the checkpoints.