The Coaster was first launched as the “Light Bus” in 1963, in response to increased demand for a minibus that could seat 25 passengers comfortably. In 1969, the vehicle underwent a partial redesign and was later renamed Coaster―a name which it has continued to use for over the past 50 years.

The Coaster supports the movement of people around the world. At present, it is for sale in over 110 countries and regions, and total sales have now exceeded 550,000 vehicles. The Coaster is also regularly seen in Japan, where it is used in a variety of situations including the transportation of passengers to and from restaurants, hotels and kindergartens.

The current, third-generation Coaster was launched in 1993. While this model has received praise for its outstanding reliability, there have been growing calls for a new design that incorporates the full safety features package. In addition, since the revitalisation of Japan’s tourism industry is expected to lead to increased demand for minibuses, Toyota has aimed to develop a vehicle that will be cherished and ridden for many years to come.

This complete redesign marks a significant evolution from the current model, and features a full range of safety functions, improved comfort, outstanding reliability, and a design appropriate for a new generation of minibuses.

The Coaster’s new features include VSC, which ensures safe driving by controlling sliding and other movements when cornering – VSC is used in the minibus segment for the first time in Japan. Airbags are installed in the driver and front passenger seats as standard.

The updated cockpit enables the driver to focus on driving – the windshield openings have been widened to expand the driver’s field of view, while an optimal distribution of function switches, as well as compartments around the driver’s seat, help minimise the need for the driver to shift his or her line of sight.

Improved body rigidity due to the ringed body frame, adjustments to engine cover structures, enhanced body-seal structures, and the optimal distribution of soundproofing materials all contribute to improved cabin quietness. The suspension features front and rear stabilisers, as well as optimised shock-absorber damping forces. Together with the improved body rigidity, this helps to realise a stable ride for the driver and passengers.

The Coaster is available in six exterior colors, including beige-metallic and white. 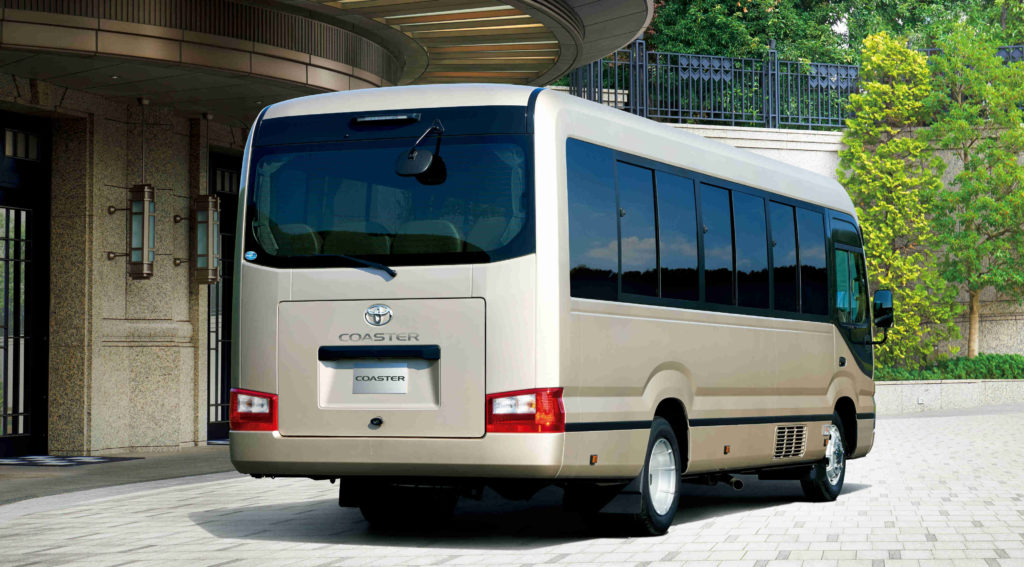