The Faro 3D Scanner, used by the Fatal Accident Investigation Team since 2016, captures a detailed 3D image of the scene that can be used to create animations to simulate the actual accident.

When an accident claims a life, Traffic Police officers from the Fatal Accident Investigation Team (FAIT) have to recreate the events and the accident scene to find out what happened.

In the old days, they relied on witnesses, photographs, a tape measure and their experience.

Now they also have the Faro 3D Scanner, which allows them to scan and map out a 3D image to reconstruct the site of a fatal accident. The team has been using the Faro scanner since late last year.

It has made the job easier for Senior Staff Sergeant Kenny Cheong, an investigating officer in the team.

Last Monday, The Straits Times observed how Senior Staff Sgt Cheong, 33, carried out his investigations at the scene of a fatal accident on Jurong Island.

A man was killed in a collision between a tipper truck and a private bus. The accident, which happened at 9am, also injured nine other people.

Senior Staff Sgt Cheong studied the position of the accident vehicles and, with the help of colleagues who had arrived earlier, recorded what he saw and sketched the vehicles’ positions.

A crime scene technician took photographs of the scene and used the Faro scanner to capture a 360- degree view of the accident site.

Meanwhile, an investigating officer interviewed witnesses and recorded their statements.

Senior Staff Sgt Cheong, who was there for two hours, looked for closed-circuit television cameras nearby which might have captured footage of the collision.

He also examined the body and the dead man’s personal belongings to determine his identity.

He later said: “Every (fatal accident) scene is difficult for us… (but) we still have to do our jobs.”

Police Inspector Jefferson Gerard Badmanathan, the officer-in-charge of FAIT, told ST that the pressure is on the investigating officer to process an accident scene quickly. 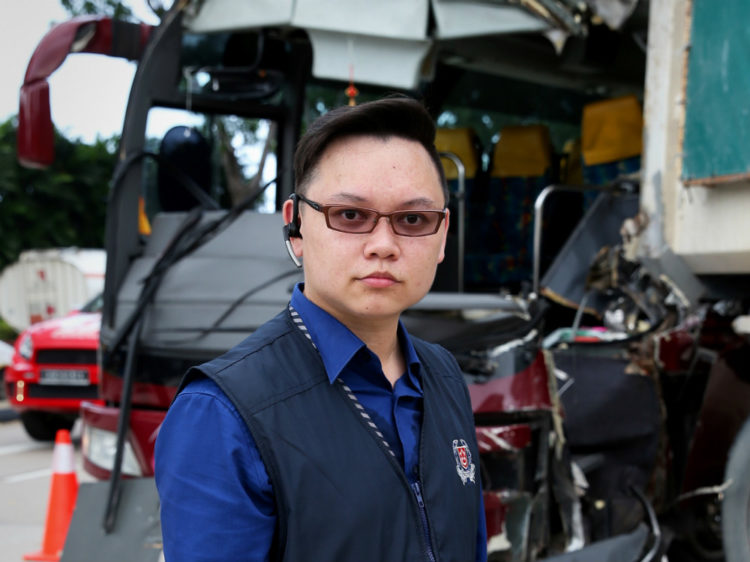 Senior Staff Sergeant Kenny Cheong, an investigating officer with the Traffic Police, at the scene of an accident on Jurong Island on 24 April 2017 where a man was killed in a collision between a tipper truck and a private bus.

Insp Badmanathan, 36, said: “When we get out of the car, just by looking at the surroundings, we’re able to get a picture of how the accident actually happened. And we reconfirm it by getting the facts from the officers at the scene.”

While Faro has made the job easier, there is one task a machine cannot replace – conveying the bad news to the victim’s family.

Senior Staff Sgt Cheong, who joined the team in 2015, said he still finds it “emotionally challenging” to speak to the victims’ families. “We have to be sensitive. It’s the sudden demise of their loved ones and they might not be able to comprehend what we have just told them,” he said.

They need a comforting voice and time to regain some composure, he added.

As far as he can, Senior Staff Sgt Cheong refrains from informing anyone who is alone at home. From his experience, he said that having others around will help the next of kin.

Most family members immediately want to know how the accident happened.

Senior Staff Sgt Cheong said: “It can be physically and emotionally exhausting when informing them (of the death). We have to use the right words, anticipate and understand their emotions.”

He also has to go to the mortuary when the body is later identified by family members.

Insp Badmanathan said the job is not for everyone. Potential FAIT candidates are interviewed and assessed to see if they are able to deal with the stress and pressure of the job.

What the officers hope to do in the end is seek justice for the victims’ families. Added Insp Badmanathan: “Police officers are human as well. Sometimes when we see family members, it affects us… We tell ourselves that the best we can do for the family is to uphold justice for them and bring the party at fault to court.”