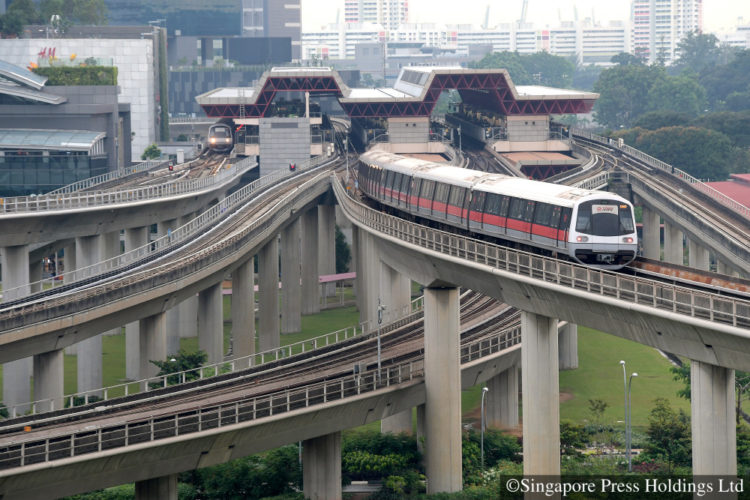 The MRT system’s reliability has improved by three times since Mr Khaw Boon Wan moved to the Transport Ministry in 2015, but the minister wants to raise the bar much higher.

Speaking at the fourth joint forum on infrastructure maintenance organised by SMRT on Thursday (July 26), the Coordinating Minister for Infrastructure and Minister for Transport said that in 2015 – the year he replaced Mr Lui Tuck Yew at the ministry, Singapore’s MRT trains travelled an average of 133,000km between delays of more than five minutes.

This is known as mean km between failure (MKBF).

In the first half of this year (2017), “it has happily gone up to nearly 400,000 (393,000) train-km”. Mr Khaw said this was based on preliminary data, and had also excluded delays arising from the testing of a new signalling system on the North-South line.

The minister noted that all five lines had improved, with the star performer being the North-East line, which clocked nearly 1 million (978,000) train-km between failures.

But since then, he noted, Taipei Metro has improved further by achieving 1 million MKBF.

At one million train-km, the system would be 7.5 times more reliable than it was in 2015.

The minister noted that the number of major breakdowns (those lasting more than 30 minutes) had also fallen to three in the first half, from 10 same period last year.

These exclude the numerous delays arising from resignalling tests on the North-south line.

Mr Khaw said the London Underground and Taipei Metro had forewarned of teething problems when a new signalling system is installed, and that he had highlighted this in Parliament early this year.

“While there will still be delays, if we have done our best to minimise them, I am sure Singaporeans will be understanding and forgiving,” he said.

With progressive software upgrades, the overall resignalling programme has been “smoother than what we had feared”.

The only exception was a major disruption on June 28, which Mr Khaw said was caused by a error on the part of Thales – the system supplier.

“We have all learnt from this, and such an error will not happen again,” the minister said.

He added that the new signalling system should stabilise before year-end “if there are no new surprises”.

Resignalling on the East-West line will follow after that, and that exercise “should be faster, as we can port over the lessons from our experience in North-South line”.