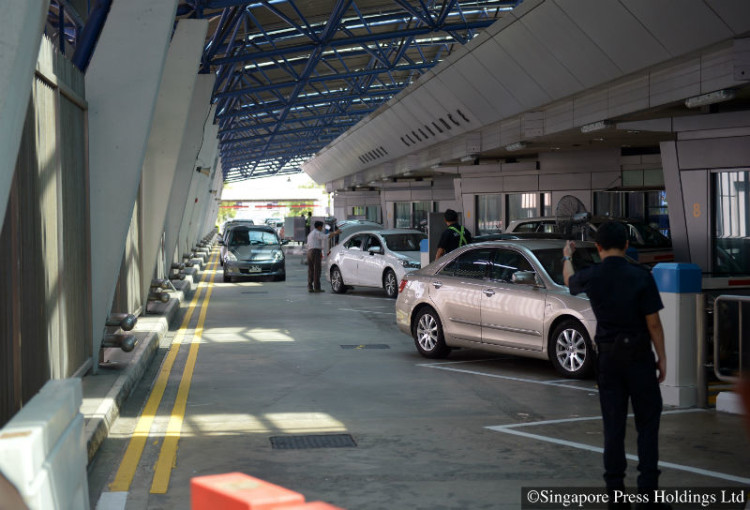 Customs checks are now conducted just before immigration clearance, which eliminates the backflow of vehicles waiting to enter lanes for security checks after immigration.

More travellers are trying to cross the Woodlands and Tuas checkpoints with wrong, invalid or missing travel documents, contributing to long waiting times. (Here’s an app that supposedly helps motorists beat those jams.)

There were 3500 cases of foreigners arriving in Singapore without proper documentation from January to October this year, up from an estimated 3400 for the whole of last year.

The Immigration and Checkpoints Authority (ICA) said 622 Singaporeans were caught leaving the country with expired or invalid passports for the same 10-month period, compared with 690 last year.

At a media briefing at the Woodlands Checkpoint yesterday, ICA also addressed questions about congestion at the Causeway during the holiday season. It got so bad last Thursday that hundreds of commuters from Malaysia tried to cross on foot instead.

Assistant Commissioner (AC) Alan Koo, Woodlands commander of the Integrated Checkpoints Command for land, said that bus drivers opened doors for commuters to spill onto the roads during the morning peak period, which added to the congestion as there is no proper footpath on the Malaysian side of the Causeway.

He also pointed to arriving motorcyclists as a source of congestion. There are four vehicle lanes on the Malaysian side of the Causeway but only three on the Singapore side, leading to a “ballooning” of traffic. This is when some motorcyclists ride on car, lorry and bus lanes after clearing Malaysian immigration and try to cut back into the motorcycle lanes at the Woodlands Checkpoint.

Yesterday, ICA also listed some of the ways that it manages traffic, including the cross deployment of staff to areas of pressing need.

Lanes are opened at the old Woodlands Checkpoint when needed, and about 100 ICA officers have been working overtime this holiday season, said the ICA.

It has also introduced a measure at both checkpoints that could reduce the wait for travellers while strengthening security.

Customs checks are now conducted just before immigration clearance, which eliminates the backflow of vehicles waiting to enter lanes for security checks after immigration.

Alarms can also be raised before vehicles go near the checkpoint exit, said an ICA official.

Student Daniel Teo, 23, who drove across the Causeway last Saturday to Johor Baru, said it took him about two hours each way.

He said: “Traffic jams are to be expected at this time of year. I just plug in some music and try not to drink too much water.”

BMW launches new M Performance Parts for the 5 Series range
This site uses cookies to help us serve you better. By continuing to explore our site, you accept our use of cookies.I Accept